Perhaps the greatest exponent of Magical Realism, Ubaldo Oppi, remains one of the most shining examples of the Italian pictorial tradition which, still in the early twentieth century, has his glorious roots in the sublime art of the fifteenth century, demonstrating how only the ancient is perennially current. Pupil of Klimt in Vienna, the young Ubaldo travels far and wide for Europe, forming mainly in Paris, at the Louvre, on Italian art of the fifteenth century, which will generate a series of his paintings of Botticelli influence, where men and women they dance freely naked in the trees, in their mysterious relationship with Nature. The symbolic, metaphysical and hermetic reference of Oppi’s painting is, in addition to Sandro Botticelli, the meticulous formal construction of Piero della Francesca and following some traits from Rosso Fiorentino, always brought back to his contemporary reality in a suspended and silent, full of atmosphere of mystery and expectation.

«And here is the Oppi to abandon the skeletal characters he had enjoyed, to give body to the figures. This new passion at first takes him so strongly that the figures fan themselves willfully, thick, sturdy: ample thoraxes shaped by tight-fitting clothes like sweaters, swollen and provocative peasant breasts, barely shaken by the rhythm of a dance, strong hands, wide , with short square fingers that tighten (and firm flesh as soon as it yields to pressure), voluntary minds, low fronts: this is a whole peasant humanity overflowing with strength, vitality: and everything is studied in formal and structural values, chiaroscuro and colors, with a love that nothing escapes». With these words Cesarino Gardini reviewed on the columns of «Emporium» a corpus of works on the subject of the country, executed by Ubaldo Oppi, between 1921 and 1924, a more sincere testimony of the artist’s love for that peasant humanity so full of strength and color that, despite the long stays abroad, the painter had known in the Cadore and had always present. 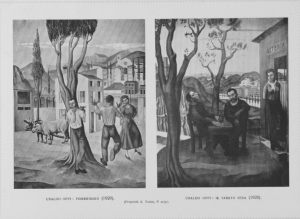 It is to these Cadore landscapes that the work presented here belongs, vital and joyful, dedicated to the theme of “feast day”, to the representation of a village Sunday, in which music accompanies silence and delights the placid quiet of the day. The subject of the painting almost seems to echo the atmosphere narrated by the famous poetry of Leopardi, and some Leopardian cadences can also be felt in the atmosphere of the work, pervaded by a melancholy joy, by a pensive and serious joy. Compared to works performed by Oppi in the same period, the compositional layout is more clearly plastic: the figures have now acquired greater proportions, and the mass of the houses has advanced towards the first floor. Oppi therefore demonstrates in this painting to proceed therefore towards an increasingly solid volume, which will lead to the powerful architecture of 1923-24.