“I was interested in American painting, which could be seen in Rome in those years, Matta, Gorky, De Kooning and above all Rothko who was exhibited in an exhibition at the Tartaruga in 1959, with Scarpitta and Kline. In 1960 I started making monochrome paintings with stripes but I no longer thought of painting others, the incentive of these paintings were the things that were around, that I looked at, the street, the pedestrian crossings, the environment, the objects. ”The reflection on the monochrome paintings, as witnessed by the above passage of an interview released by the Roman artist in the Seventies, springs from the fascination exerted by the contemporary American artistic experiments on the research undertaken by the young Tano Festa.

The work presented here is fully part of the informal and neutral approach that characterizes the first part of the production of an artist who wants to reaffirm the same sensitivity that led him to prefer the everyday object, made as a chance encounter and continuous attendance. Festa, through the almost monochromatic and unaltered image, wants to reaffirm the value of custom with the history of art and with history in general, to reaffirm the sense of detached continuity with a past that in any case belongs to it. 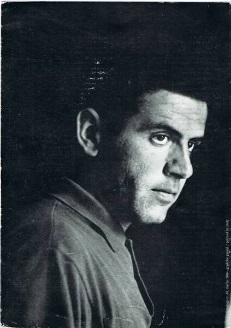 After a first informal and gestural approach in which rigorous spatial rhythms are constructed by variations of thickness and surface matter (Rosso signal n. 9, 1960; A Sandro Penna n. 47, 1961), Tano Festa’s research acquired personal connotations conceptual of neodadaist matrix: from the grafting of the image or of the object built into the picture (Lapide, 1963; Study for piano, 1963; series of the Obelisks, 1963), to objects (series of Windows, Doors etc., 1963) constructed as images to be perceived, to the transposition and manipulation of photographic details taken from famous works, such as the Arnolfini Spouses by van Eyck or the Creation of the Man from the Sistine Chapel and the Medici Tombs by Michelangelo.

Later the ways of manipulating images and space became more pictorial and disturbing: from the series of Homages to color, from the Seventies, which presents the names of Degas, Renoir, van Gogh or Picasso on cloud backgrounds made of fast brushstrokes , to the Coriandoli series or to the works of the Eighties, full of references not only figurative (To James Joyce, Homage to Munch, of 1984; The entry of Christ to Brussels, 1985; Don Chisciotte, From the universal judgment, The guardians of castle, Mask, from 1987).