Since his very first education in the arts, Mosè Bianchi finds a point of reference in his father Giosuè, a good painter, who will have great influence in the choice of his son to pursue his artistic career. At the turn of the fifties and sixties Moses attends the courses of Giuseppe Bertini in Brera, where he will meet and discuss some of the protagonists of the Milanese Scapigliatura, meetings that will prove decisive in his freedom from painting history and the academic portraiture that connote his early youth.

In 1867, the success of the Pietro Oggioni’s Competition for the painting, organized by the Brera Academy for a period of three years, allowed him to stay in Venice and later in Paris, where he came into contact with the painting prevailing at the time in the French capital; sparkling, slightly frivolous painting, whose references were made by the painters Mariano Fortuny and Ernest Meissonier. 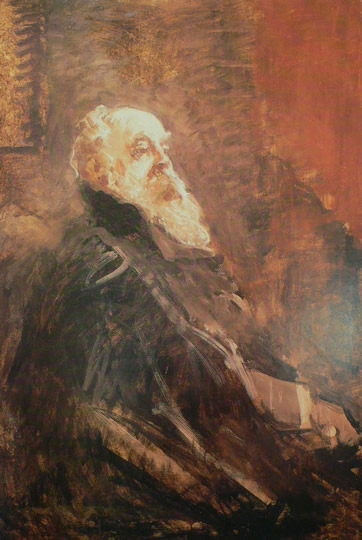 From these bases Mosè Bianchi elaborates a personal synthesis attentive to the environmental reconstruction and to the psychological definition of the characters, theatrically put on stage in allusive backgrounds of a reality more imagined than true. His painting moved and with quick touches of color and his pleasant subjects, often of anecdotal taste, met the favor of the public and assured him a great notoriety at the national level. At the end of the ’70s the search for particular atmospheres led him to Chioggia, where he will stay several times and will run a vast repertoire of lagoon setting subjects, full of luminous suggestion and emotional participation.

Precisely in this vein is this dreamlike view of a gondolier with in the background the church of San Geremia, whose profiles can be hardly felt in a rarefied pictorial texture, all played on the vibrations of light and on a suffused chromatism. A similar approach to painting will characterize the Milanese experience of Bianchi: the Lombard metropolis is admirably described in nocturnal scenarios, often covered with snow, animated by characters just outlined, dashed by quick brush strokes and yet capable of making the vitality of the city.