Graphite enamel and collage on paper cm 67,5 x 56,5 entitled and dated lower right. The artwork is archived in the General Archive of Mario Schifano’s work, edited by Monica Schifano, with authentication released on 12/04/2010.

Mario Schifano is an Italian artist and painter highly appreciated internationally for his continuous artistic experimentation as well as for opening up to an Italian way towards pop-art. After moving to Rome with his family after the end of the war, the young Schifano began his artistic activity as a painter. His first works were influenced by the influence of Informal Art and he inaugurated his first solo exhibition in 1959 at the Appia Antica Gallery in Rome. Already from the following year, Schifano’s painting underwent a radical change. The artist paints monochrome paintings; cards covered with a single uniform and superficial color almost a sort of screen in which all events and objects are canceled. During 1962 Schifano visited the United States where he came into contact with Andy Warhol and the Pop Art movement, being very fascinated by the work of Dine and Kline. At that time, some of his works will be exhibited at the New Realist exhibition at the Sidney Janis Gallery in New York where they are no longer confronted with the European new realists (Schifano, Arman, Christo, Hains, Klein, Raysse, Rotella, Spoerri and Tinguely). The historical exponents of the American neodada such as Johns, Rauschenberg, Stankiewicz and Chamberlain but the new generation destined to explode under the banner of Pop Art or Warhol, Jim Dine, Indiana, Lichtenstein, Oldenburg, Rosenquist, Segal, Thiebaud and Wesselmann. After setting up several solo shows in some of the major European cities such as Rome, Paris and Milan, he returned to the United States in late 1963. 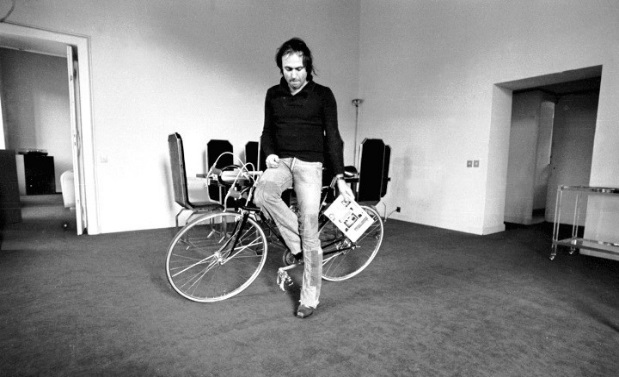 Just in 1963 the relationship between Schifano and the merchant Ilena Sonnabend who had imposed it on the American market broke. His “Incidents” and “Anemic Landscapes” became famous and, at the top of his career, he stopped producing monochrome paintings and began to revisit the masters of the past, from the classics to the avant-garde. Here is “When I Remember Giacomo Balla”, a series of tributes to the great futurist which includes the work presented here performed in 1964.

Back from the USA, Schifano rediscovers the technique of the past but more precisely his personal figuration of the past. By revisiting the history of art, Schifano begins to work on thematic cycles. It is the period from the late 60s to the mid 70s when landscapes become increasingly synthetic and gestural, leading his works towards the famous Anemic Landscapes. In 1971 he participated in the exhibition Vitality of the negative in Italian art 1960-70, curated by Achille Bonito Oliva and is present at the X Quadrennial in Rome.