Felt-tip pens, graphite and collage on cardboard 45 x 62 cm executed in 1977-78, signed (Schifano) in the lower right corner, with dedication: X Lina MS, upper right. Authentic work included in the General Archive of Mario Schifano’s work with the n. 04018190413 on 6 May 2019 by the Mario Schifano archive, chaired by Monica Schifano.

Mario Schifano’s reflection on the iconic power of images marks his entire artistic career. Already in the early seventies, the exhibition “Paesaggi TV”, held in December 1970, testifies to the search for a pictorial language capable of merging tradition with the irruption of new media in everyday life: in the works exhibited on that occasion it begins to bring back the video images directly on emulsified canvas, isolating them from the narrative rhythm of the sequences to which they belong and repeating them with touches of nitro color in an alienating function. In this regard, Schifano says: “The process is long and elaborate. But only in this way can I obtain those effects of realism and visionary that I run with my imagination”.

Alongside a placement of one’s figurative code within a modern “new objectivity”, attentive to the anthropization of urban space, marked by the increasingly massive presence of mass media, such as film, comics, advertising, the signage, Schifano realizes a series of works realized using poor materials and rudimentary tools, created starting from 1963: stories of flattened visions, written using the collage technique, where the chromatic spectrum becomes poorer and each descriptive element is annulled. In this regard, Maurizio Fagiolo Dell’Arco said: “No sky, no sunset, no panorama; or rather, the ghost of the panorama, of the sunset, of the sky “. 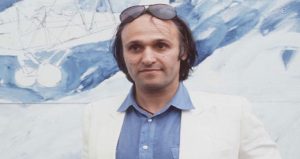 That same sky, absent in the works of the Sixties, returns to the fore in one of the two works presented here, the triptych of watercolors made on loose papers applied on turquoise cardboard, in which the childlike drawing of two small boats with the imposing profile of a jets stand out against a celestial vault made up of fast and textured spatulae of color.

The work presents itself as a swirling impression of an open space that conveys a panic sense of anxiety, where the magmatic pictorial drawing embodies the disturbing interiority of the artist. The material treatment of color, the violence of varnishing, the multi-chromatic diagonal lines that cut through the horizon make this collage a significant work within the artistic production of a by now mature Schifano like, on the other hand, the second work presented here, on the other hand, the protagonist is the heart, one of the most recurrent themes in the corpus of works created by the artist since the 1960s, a symbol of his indomitable passion as a rebel artist for any academicism and tireless in following an absolute path autonomy free of all ideological conditioning.