The production of the Bolognese scenographer and painter Luigi Bazzani is exceptional. His works are preserved in many prestigious galleries in Italy and abroad: in the National Archaeological Museum and in the Capodimonte Gallery in Naples, in the Gallery of Modern Art in Rome, but also in the Victoria and Albert Museum of London, which bought over a hundred watercolors from the artist. In particular, the contribution that his watercolors, characterized by great artistic quality and by a prodigious technical ability, still represent for the study of Pompeii and its history, is extraordinary.

Those presented here constitute a selection of the immense patrimony constituted by the works of this artist – who worked in Pompeii for about thirty years between about 1880 and 1910 – and made up of hundreds of watercolors and drawings, mostly unknown to the public and to the archaeologists themselves, works that give back buildings and paintings that are seriously damaged or disappeared with absolute precision. Only in 2013 the Fondazione del Monte di Bologna presented a conspicuous part of it in an exhibition entitled “Davvero! The Pompei of the late 1800s in the painting of Luigi Bazzani”: an occasion, the one created by the Felsian institution, to rediscover the essence of Bazzani’s Pompeian paintings: the motive is to reproduce the places and the sensations, the lights and the wonder of a visit to the city, to recreate suggestive views, wrapped in a silent and luminous atmosphere, with a strong evocative value. 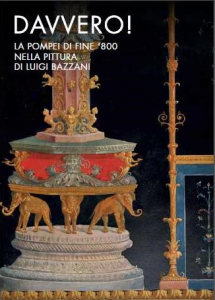 His watercolors allow you to take a real journey into Pompeii in the second half of the nineteenth century, each time exploring different moments of the period in which the artist worked in the city of Campania: the complex relationship between painting and photography, technique innovative that was affirming itself in those years, the “neopompeian” current of historical inspiration, to which Bazzani himself adhered for some time, the definitive evolution of his work towards landscape painting, whose intent was to revive in the observer the charm and emotion of a visit to the ancient city. The streets of the city, the sunny and silent urban views, are one of the most characteristic features of Bazzani’s production: the eye of the painter dwells above all on the minor streets, on the narrow and abandoned alleys, which more than others allow to impress the operates the suspended and immobile atmosphere of the ancient city.