Luca Pignatelli was born on June 22, 1962 in Milan, the city where he lives and works in a studio house he designed himself. After completing his high school studies, he enrolled at the Faculty of Architecture of the Milan Polytechnic in 1981. He attended courses in architectural composition, in those years marked by the intuitions of Aldo Rossi and the idea of the sedimentary growth of history that for Pignatelli will then take on a particular relationship with regard to painting, linked to research on time and memory. Always attentive to the changes that take place in the scenarios of art, painting and architecture, Pignatelli is able to condense them with a transversal historical reflection. For the artist, the city and the history of art represent a sort of fixed scene of human affairs, as well as a dimension with which to entertain a research and operate analogies, such as changes. He is fascinated by the anonymous architectures and port cities encountered in his journeys through European cities such as Milan, city of birth and place of election, and in the same way by American cities such as New York, where he stays for long periods starting from 1986. 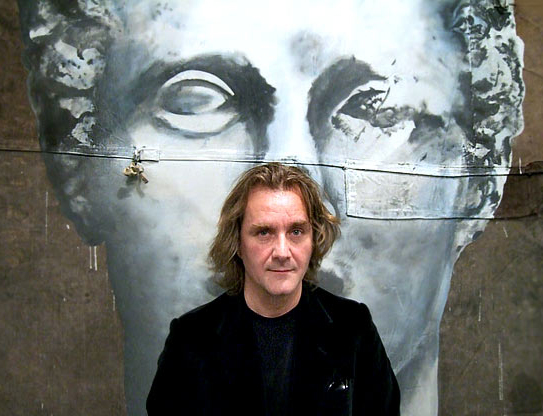 Painter able to face the challenge of large dimensions, Pignatelli usually works on anomalous, recovered and already pictorial supports: hemp tarps, woods, irons, assembled papers and fabrics, on which he intervenes by superimposing his own selection of images, icons of collective memory, drawn from a sort of universally known repertoire. His works fathom between archive images, often artifacts of courtly classicism, but also urban or mountain landscapes, sometimes trains, planes and man-made machines. His images are those of a classicism always alive and present that does not speak the silent and inanimate language of the copy. Each work by Pignatelli reproduces memorable objects, artistic artifacts that evoke feelings that cannot be filled with eternity and infinity, of which we are today the recipients, making us understand or feel only the echo of sublime emotions, something infinite and timeless. A tangible echo in this wood, one of the favorite themes of the Lombard artist, in which the theory of very high trunks filtered by a boreal light, becomes a rhythmic sutured score, sewn by a hook, discreet and poetic object trouvé.