Indian Ink on paper cm 27 x 21,5 signed lower right with monogram HR and dated (1918). Entitled (Tête Dada), dated (1918) and numbered (neg nr. 145) on the back, where is attached the label of Galleria del Naviglio, Milan. On the back, further drawing of the artist. Provenance: Marcucci collection, Rome.

After studying architecture for a short period at the University of Berlin, in 1908 Johannes Siegfried Richter (Hans Richter) enrolled at the Academy of Fine Arts in the same city and the following year at the Weimar Academy, where he studied the study of ancient masters. Around 1912 he began to approach modern art, taking an interest in the works of the Blaue Reiter artists and visiting, the following year, the “Erster Deutsche Herbstsalon” at the Galerie Der Sturm in Berlin, where he saw the works of the Fauves, the Cubists and of the futurists. The beginnings of his artistic career are interrupted by the war, which sees him busy at the front until 1916, when he is dismissed because of an injury. In the same year the magazine “Die Aktion”, with whom he had previously collaborated, dedicated a special number to him; he also held his first solo show at the Hans Goltz gallery in Munich. 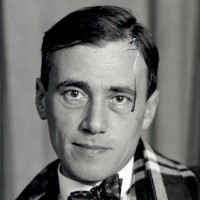 Moving to Zurich, he joined the Dada movement and in 1917, after a brief expressionist period from which his visionary portraits originate, he began the first abstract experiments. It is to this particular experience that it is possible to trace this “ Tête Dada”, performed by the artist in 1918, the year in which he met the Swedish painter Viking Eggeling, starting a collaboration with him based on a common artistic research. The work presented here constitutes a reflection on the oval of the human face elaborated starting from the decomposition and fragmentation of the typical avant-garde shape. Richter, fascinated by the pictorial theme of the human head, will return there in the Sixties when he will make a series of grotesque and surreal portraits of some protagonists of the international Dadaist movement (Hugo Ball, Arp, Schwitters, Max Ernst, Huelsenbeck, Tristan Tzara, Janco, Serner , Marcel Duchamp) mixing them with anonymous faces, sometimes enlivened by witty or sculptural definitions.

In 1920 he joined the November Group in Berlin and collaborated with the Dutch magazine “De Stijl”. In the desire to give an authentic movement to his works, in 1921 he approached the cinema and made his first abstract film Rhythmus 21. From 1923 to 1926 he directed, together with Mies van der Rohe and Werner Graeff, the magazine “G”. Later he made documentaries, advertising and experimental films, while not interrupting the pictorial activity. In 1940 he moved to the United States, where he devoted himself mainly to the new linguistic codes of cinematographic communication.