«Looking at Migneco’s drawings, one has the proof of the sincerity of his paintings. Someone said that the drawings are, often, the “dreams” of a painter, that is, they represent the most exposed side of his ambitions, announced and denounced but which then fade in front of the painting. From this proof Migneco not only goes out, but more persuasive. I would say that this is for two reasons. The first: in the ductus there is a sensitive definition of his way of understanding, of transfiguring, of interpreting the form. The second: in the little “color” used as a chromatic solicitation, there is constant trust in certain tones, which then dominates in his paintings. Finally, in the drawings the invention of the theme translates and always ends in a dramatic feeling that human reality that distinguishes his major work.
It seems that in the exercise of drawing he realizes his socially pictorial (or pictorially social) reality. With the most spontaneous resources of fantasy, filtered through the purity of feelings and not through the cunning of the craft.» With these words in 1970 Enrico Emanuelli emphasized the importance of drawing in the artistic path of Migneco. 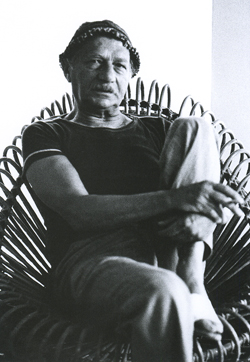 Migneco’s painting manifests itself in the early Forties with a “long, aggressive, preferably green, brushing, including threads of yellow chrome vibrate”. This free and violent trait clearly reflects the echo of Van Gogh, even though Migneco had known the Dutch master only by means of reproductions. His horrid is referred to as moral interest, to the development of a Rouault and a Soutine, rather than to the pure expressionistic mask.
This particular declination of the theme of the anti-beautiful, filtered through a meditation conducted by Migneco on primitivism, is traceable in the work presented here, a nude woman, in which, if the face recalls the Negro-African sculpture, the featured sex evokes the Origin of the World by Courbet, a masterpiece of French realist art.