One of the last and certainly the best exponents of the 18th Century tradition of view painting, Giuseppe Bernardino Bison received his artistic training in the Accademia of Venice, where he studied perspective through the work of Antonio Visentini and the painting of Staffage in the 18th Century manner. Having qualified in 1789, Bison embarked on an increasingly hectic career as a decorative painter; he was taken to Ferrara to collaborate on the decorations of the Palazzo Bottoni, and from there he moved to Treviso and to Padua, where he worked at the Teatro Nuovo. In around 1800, he returned to Venice — at that time in Austrian hands — where he worked in the Palazzo Dolfin before settling in Trieste.

There, Bison became extremely successful for his murals but he also worked tirelessly as an easel painter. He received numerous public and private commissions, the most prestigious being the scenes in tempera from the Iliad of 1803-04 in the Sala rotonda of the Palazzo Carciotti and the vast ceiling of about 1805 in the new Stock Exchange.

In 1831, at the age of sixty-nine and for reasons which remain obscure, he moved to Milan. Whilst he exhibited frequently at the Academia di Brera and produced stage designs for the Teatro della Scala, during this last period of his career he worked chiefly on small scale paintings and probably began travelling again, to other cities in the Northern regions and possibly also to Rome and to Florence. Like his contemporary, Giacomo Guardi, his diminutive views were greatly admired by visitors from abroad doing the Grand Tour, but his superior technique, delight in detail and pictorial eloquence suggests that he worked only to the highest standards and for a discerning audience. 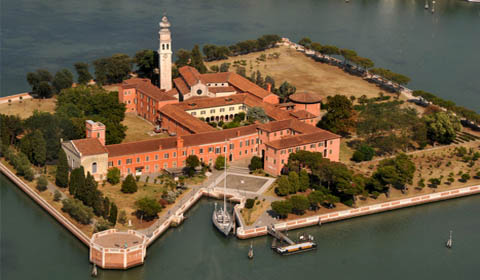 This view of the small island of San Lazzaro degli Armeni in the Venice lagoon belongs to this corpus of works, highly appreciated by the international market. Located near the west coast of the Lido, the island, one of the first centers of Armenian culture, is completely occupied by a monastery, the mother house of the Mekhitarist order.