In 1924 Giulio Aristide Sartorio took part in the cruise of the Regia Nave “Italia” directed in Latin America. The ship, which left La Spezia on 18 February 1924, had the task of promoting Italian craftsmanship and art in the lands of South America; the journey was the result of an initiative, promoted by the Italian Government at the suggestion of D’Annunzio. In the “floating exhibition” the aesthetics of D’Annunzio was easily recognizable: as a sort of mobile Vittoriale on the waters of the ocean, the boat was a showcase of the results achieved by Italian art and craft. Through a press release, drawn up for the Paris newspaper “L’Italie Nouvelle”, the aims of the expedition were set: “To give the precise feeling of our industrial potential and of the renewed spiritual will and action of the Italians. Reaffirming in our fellow countrymen those who live and work in Latin America the legitimate pride of feeling themselves children of Italy”. 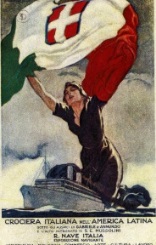 The Italian art exhibition was organized by Giulio Aristide Sartorio, who, during the eight months of the expedition, made about 200 paintings, a sort of visual logbook that documented all the stages of the transoceanic journey. The exhibition space available on the ship was not very much: the exhibition was in fact set up on the deck of the second walk. The works were then exposed to the open and were intended, in addition to the display, also for sale: every time the ship landed, in fact, the exhibition was rearranged exposing also other works crammed into the warehouses. Sartorio, in addition to selecting the works presented in the exhibitions, also took care of decorating the grand bow and stern stairs of the large boat with stupendous friezes.

Within the expedition carried out by the Italian ship, the painting presented here represents an extraordinary document: it conveys, in fact, all the emotion aroused in the painter’s palette from the encounter with the mestizo populations of Haiti, the Caribbean country touched by the ship on 10 September 1924. The depiction of the small indigenous inhabitants of the Central American area involved in a playful moment with an ape and represented with authentic shots of pure light, represents one of the most lyrical pictorial tests performed by Sartorio during the entire duration of the cruise Italian, testimony to the fascination exerted by exotic atmospheres on the art of the great Roman painter.