Oil on panel cm 39 x 48,5 signed (G. Zangrando) and situated (Cigale) lower left. On the back, pencil notes regarding the place depicted.

Instinct, according to the still romanticism and impressionism inherent in the artist’s painting, and positivist rationality in the solid layout of the figures and in the declination of the landscape, connotes the pictorial ductus of Zangrando, a Triestine painter with a good temperament, as the Cuban traveler Jorge Juan Crespo della Serna recounts. The latter, present in Trieste in the early 1900s, after a visit to the painter’s studio, in his book “Habana-Vienna, Impresiones de Viaje” (1907), draws a vivid description, in which he highlights the atmosphere full of verve and gentleness by the many models who used to attend the painter’s atelier.

Sociable and companionship, in 1905, together with his colleague Guido Grimani, Zangrando inaugurated a school of painting in Trieste, precisely on the first floor of the then Corsia Stadion (today via Battisti) n. 20. Here, Zangrando teaches the figure and the still life, Grimani the landscape. At their school some young people are formed and then distinguished in pictorial art, such as Arturo Nathan, Giannino Marchig and Eugenio Finazzer Flori. The association ended forcibly in 1914, at the outbreak of the first war. 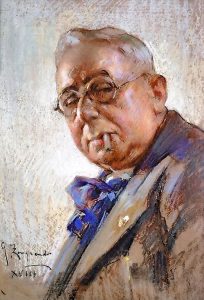 Returning to Trieste, meanwhile became Italian, the painter immersed himself in the political climate by participating in the swarm of exhibitions with iconic portraits but also with extraordinary landscape studies: a synthesis of this dual polarity of style elaborated by Zangrando is the painting presented here, in which profile of a young woman stands out on the foreshortening, built with rapid brushstrokes and sublime touches of light, of the pinewood of Cigale, one of the symbols of Lošinj, Croatian island in the upper Adriatic. The dialogue between the female figure and the surrounding nature thus becomes a litmus test of the relationship that the painter has constantly had in the course of his life, with the secular pinewood overlooking the port of Lošinj, protagonist of some of the paintings executed by the master among the Twenties and Thirties of the twentieth century.