The two characters in eighteenth-century dress, which refer to a courteous atmosphere, are the protagonists of a benevolent competition. The first knight tries his hand at singing or poetry while the latter shows off his qualities as a musician. The two bronzes must be considered an indivisible pendant because the correct use of the work is done exclusively by the presence of both characters. The same bronze couple is in the Croce collection, now visible at Palazzo Filomarino in Naples, home of the Italian Institute for Historical Studies, thus dispel any doubt about this judgement.

The couple forming a single work owned by Benedetto Croce was published in 1922 in “Vita e Opere di Giovan Battista Amendola” by Filippo Abignente and Mariano Orza (Abignente-Orza 1922, plates nos. 3250 – 3251). On both the bronzes Amendola affixes the date 1879, year that coincides with his departure for London (Irollo 2007, page 92). 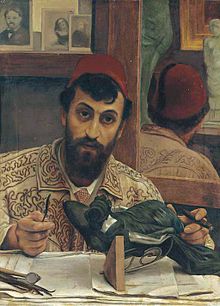 The author probably made the pair of bronzes shortly before he left Italy for England, where, supported by the friendship of the painter Alma Tadema, sculpted numerous portraits, acquiring a reputation as a refined and fashionable artist, especially in delineating figurines-portrait of English ladies, modeled with delicate grace and elegance; after all, Amendola had already shown, in previous years, a certain interest for the eighteenth century. We recall that in 1871 he created Pergolesi for the Teatro Verdi of Salerno, and in 1874 at the VII Exhibition of the Promoter of Naples he presented “The lover of the eighteenth century of 1870”.

It is conceivable that Amendola, in his desire to represent his eighteenth-century musician, used as a figurative model Paisiello di Stanislao Lista of 1861, present in the Teatro San Carlo in Naples, indeed, the physical appearance similar to the Amendola and to “Paisiello” by Lista is evident, as well as the hairstyle and the garment is similar. These similarities can also be found in the paintings and printed engravings depicting the composer of Apulian origins. These two specimens are unpublished.