The subject of the work proposed here is clarified by the same title with which it is known, “Futurlibecciata”, precisely: the readable image against the light is the result of a successful experimentation that leads the painter to give life to a convulsive dynamic scene in which the fluctuating lines and vortices rendered with iridescent tones make the full effect of the libeccio wind power. The complex design is inspired by the wave motion, demonstrating once again how Balla, having reached an expressive maturity, the culmination of the Futurist experience, takes inspiration from the observation of nature, where the density of water is rendered through the scratch of the graffiti pencil on paper, whose stroke strength is taken from a speed study. In the eyes of Giacomo Balla, the fury of the same wind, with its effects on the skies and waters, evokes a veritable explosion of waves, lines and shapes, perfectly in line with the simultaneous visions and interpenetration of light typical of Futurist poetry.

A subject, that of the Futurlibecciata, on which Balla will often return in the course of his artistic parable, until the end of the 1930s, when he realized several versions testing himself in a new technique, that is the use of industrial paints on a hardboard support. Hardwood is imported into Italy only since the Thirties; in particular in 1936 the factory of this material was built in Faè di Longarone, in the province of Belluno, exploiting forest waste from the surrounding mountain areas. The use of industrial paints that give the composition a particular glossy effect is above all innovative. Balla had procured the dyes from the workshop of Armando Ricci, technician of the car manufacturers Maserati, Ferrari and Lamborghini, which stood in Via Oslavia in Rome, right near his home. 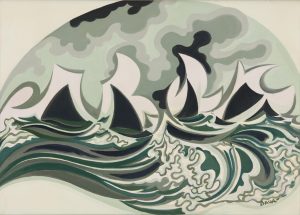 The futuristic series can be considered as the incarnation of a vein of imaginative and joyous lyricism that pervades Balla’s late Futurist works: studies, sketches, projects for objects then realized or only dreamed populate the Turin artist’s production characterized by a particular and functional application, often articulated in symmetrical, crossed, stellar, modular decorative systems, with an irrepressible wealth of procedures and stylistic choices. The manifesto of the Futurist Reconstruction of the Universe, conceived and signed in 1915 together with Fortunato Depero, had indeed marked a decisive turning point in the development of Futurist aesthetics. The two artists had advocated the overcoming of the purely pictorial dimension in view of a renewal that must involve all aspects of art and life, in “a total fusion to rebuild the universe cheering it up, that is, recreating it in its entirety”.