A vein of imaginative and joyous lyricism pervades Balla’s late Futurist works up until the beginning of the 1930s: studies, sketches, projects for objects then realized or only dreamed populate the Turin artist’s production characterized by a particular and functional application, often articulated in symmetrical, crossed, stellar, modular decorative systems, with an irrepressible wealth of procedures and stylistic choices. The manifesto of the Futurist Reconstruction of the Universe, conceived and signed in 1915 together with Fortunato Depero, had in fact marked a decisive turning point in the development of Futurist aesthetics. The two artists had advocated the overcoming of the purely pictorial dimension in view of a renewal that must involve all aspects of art and life, in “a total fusion to rebuild the universe cheering it up, that is, recreating it in its entirety”. 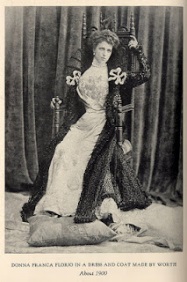 From this moment Balla starts innovative experiments in numerous sectors, from painting to graphics, from decorative arts to theater and fashion: his home, first in Parioli and then in via Oslavia in Rome, becomes a lively forge in which to design, invent and construct furniture, furnishings, clothes and colorful accessories, cheerful and magical. It is precisely in this renewed research that the work presented here is inserted, significant also for the commission received from the futurist: in 1925, in fact, the famous lady Franca Florio, one of the most famous characters of the belle èpoque, asked Balla for a shawl having the owl as a basic reason. The artist from Turin designed the article by alternating the synthetic naturalistic representation with an abstract form that modified the space surrounding the nocturnal bird of prey in a modulation of dynamic surfaces. The execution was personally supervised by Balla, who personally took care of the printing on the silk of the cardboard models he designed. This project on paper, coming from the Marcucci collection, so fresh in execution, gives us the measure of Balla’s genius, a skilled designer also in the applied arts: the naturalistic-synthetic representation with an abstract form modifies the space surrounding the owl in a modulation of dynamic surfaces that fill the top part of the paper support in a whirling swirl.