Marble stucco painted 18 x 9 x 5 cm signed on the label affixed to the base.

The small-sized work, one of the most beautiful examples of Ciusa’s sculptural production, depicts the bust of a girl laughing with a graceful delicacy, the true aesthetic principle of the research undertaken by the great Sardinian artist. In the small-format sculpture Ciusa finds graceful and smiling accents, extraneous to large public commissions, and devotes more attention to the description of the costume, which sometimes becomes central, as in the case of the hat-shaped headdress worn by the young teenager, protagonist of the work presented here.

Various specimens are known of the girl of Desulo, of a neo-fifteenth-century purity. Particularly happy is the version that includes the shoulders, like this one, in which Ciusa seems to look at the busts of Francesco Laurana. Even the description of the costume is bent for the purposes of style: in order not to compromise the continuity of the throat line, the detail of the lace tied under the chin has been deleted, so that the cap of Desulo’s costume ends up resembling a Renaissance headdress. The shaped base adorned with motifs taken from Sardinian craftsmanship is replaced, in the later versions, by a simple base with an elliptical section.

Ciusa’s language still maintains references to classical and Renaissance art, but now it also reveals a search for closed, compact forms, smooth and rounded volumes, which owe something to the Deco taste. On the other hand, the sense of warm craftsmanship created by the painted marble stucco detaches it from the déco ceramic, which prefers the smoothness of the glazes and the bright color accords. 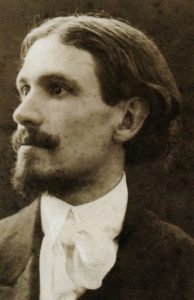 Ciusa has been interested in applied arts since 1917. In that year he signed the manifesto “Renewing We Renew”, which, launched by Galileo Chini, Plinio Nomellini and the sculptor Filippo Cifariello, proposed to suppress the academies and replace them with capable artistic-industrial schools to renew the decorative production through the reference to the popular art of the various regions. It is precisely in this direction that, shortly after, the Italian debate on the renewal of the sector is oriented. Ciusa, of course, is in harmony with a climate that leads to re-evaluate traditional craftsmanship in all its expressions. Beyond the economic motive, to push Ciusa towards the decorative arts is also the need to find a more direct meeting point between one’s artistic research and the material culture of its people, the wonderful heritage of forms offered by chests, costumes and from the carvings of the shepherds. Between 1920 and 1922 he models, in fact, small masterpieces: “The return”, “The bell” and “The sack of orbace”.