“Ermogene Miraglia can well be framed among the great artists of nineteenth-century Neapolitan painting, for the perfection of design and for the tones and harmony of colors. The art of this master oscillates between Renaissance pictorial classicism and Impressionism, almost a synthesis of these luminous periods and is linked to the highest traditions of Neapolitan painting of the last century […] In front of his works there is the certainty to be in front of a master of color. He does not knead on the palette but on the canvas while he is painting. His works are rich in material and are felt in the successive passages of tones, which are never repeated, a limpidity of brushstroke, a certainty, a freshness that amazes […] Another reason for admiration is the taste of the particular really felt, fruit of sure and wise touch, not born of scholastic pedantry: Miraglia from an excellent nineteenth-century introduces us to subjects that belong to the family” (Domenico Maggiore).
Miraglia is self-taught (although later will be awarded the title of honorary academy by the Academy of Fine Arts in Naples), but feels the magic of French Impressionism and the influence of the painters Antonio Mancini and Vincenzo Irolli, with whom he shares the taste for the full bodied and materic pictorial dough. Precisely with Vincenzo Irolli, who will always consider his great teacher, he will make a sincere friendship and learn from him how to clump and concentrate the color in the brush strokes and strokes and to create the light with combinations of color spots. 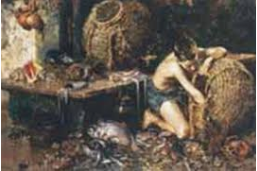 Even in the case of the painting presented here, the influence that Irolli exerts on Miraglia is evident: in fact, the theme of miraculous fishing derives from a precedent carried out by the Neapolitan master, “The lucky fishing”, which appeared on the art market in 2004. Miraglia seems to resume the figure of the young fisherman, painted by Irolli, intent on rummaging in the wicker basket, taking out an abundant fish collection.
The version that Miraglia realizes is, of course, to be included in that part of his production in which he illustrates characteristic scenes that take place in the popular neighborhoods of Naples, the painter’s birthplace. The scene takes place in a low dark and humid background of old Naples. The boy, probably after a long day at sea, has the fish on the ground to please the abundance. Following the model inspired by Irolli, Miraglia has stopped a moment of daily life and, what attracts, in addition to the beauty and harmony of colors, are inner qualities of feeling, thought and mood that the painting reveals. His painting is an instinctive painting, because, while retaining the traditional characters of Italian painting in general and Neapolitan in particular, is very personal for the technique and the content at the same time, so is detached from that of its masters and his peers.