Graduated in Belgium in 1956 at the Ecole Nationale Superieure, Enrico Castellani moved to Milan at the end of the Fifties, strongly influenced by the personality and work of Lucio Fontana, and it is precisely in the Milanese city that he became friends with Piero Manzoni. Despite having diametrically opposed characters – Manzoni more outgoing and playful, Castellani more introvert and thoughtful -, the two artists share informal experiences, later abandoned with the foundation, in 1959, of Azimuth magazine and with the frequentation of the homonymous gallery, where the new awareness of Castellani himself will find an ideological and concrete space, also shared by other names including Agostino Bonalumi.
With Azimuth it happens the zeroing of the previous artistic experiences takes place in favor of a new concept of art based on monochrome works modified by extroflexions through nails, ribs and shapes of wood or metal inserted behind the canvas, so as to suggest light and shadow effects that create tensions, pauses and rhythms on rigorous geometric patterns. 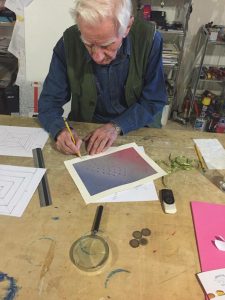 The first extroflexion of Enrico Castellani, “Black relief surface”, dates back to 1959, and since then the artist has always continued a speech of extreme purity of the artistic medium, succeeding, through a constant methodology, to always find new solutions and original. If initially the points of extroflexion tended to divide almost exclusively on parallel or orthogonal lines, with the passing of the years they have multiplied, distributing themselves more on the canvas, giving the works a rhythmic aspect always faster and varied.
Precisely this rhythmic and varied harmonic distribution is characterized this acrylic, dated 2015, among the last to have been realized by the master, as shown in the photo reproduced here. In fact, this extraordinary work lies precisely within the corpus of extroflexions on paper, wrongly too long considered as minor works, but instead, embracing a period of time that goes from the Sixties to the end of the Nineties, represents a fundamental artistic experience of Castellani. Not preparatory studies or mere exercises of style, in fact, but real works of art, which share with his paintings – contended today by the greatest art dealers and collectors of the world – the same distinctive trait: meticulous geometric designs embossed out of the paper with a careful punching, here, however, distributed on a shaded surface using three different colors.