The name of Carla Accardi is now fully included among those of the most representative artists of the second post-war Italian period, also evoking its role as a bearer of abstractionism and pioneering of feminism. Strongly endowed with artistic taste, after courses at the Academy of Fine Arts in Palermo and Florence, in 1946, he moved to Rome where, attending the studies in via Margutta, he met many young and promising artists and established friendships with them. In 1947 he joined Formalism and signed, with his friends Consagra, Attardi, Dorazio, Guerrini, Perilli, Turcato and with Sanfilippo, who in 1949 will marry, the manifesto of Gruppo Forma 1, a Marxist-inspired avant-garde group.

He took part in numerous group exhibitions, both in Italy and abroad, and held his first solo exhibition at the Galleria Numero di Firenze, followed in 1950 by the one at the Libreria d’Age d’Or Gallery in Rome, presented by Turcato.

After discovering and being fascinated by the cubist decomposition, the artist – more and more determined to look for her way – arrives at the poetics of the sign that will lead her to realize more and more recognizable and unique works. In fact, it creates a universe of its own, made of signs that intertwine, move away and embrace, becoming mysterious abstract and two-dimensional writings that cancel the distance between the background and the sign. 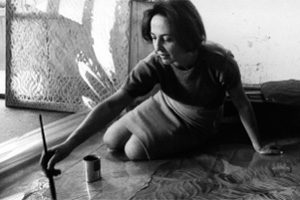 She paints from top to bottom, first on the sheets, then on the canvas, placed on the ground. The photographs that portray her at work, often immortalize it on the ground or on a table but never at the easel, which does not exist for her. She seeks freedom and her signs must “feel” free to expand without limits, without spatial constraints.

Since the late seventies the search for fluidity with the surrounding environment, going beyond the limit of the canvas, finds expression in some works where the color incorporates frames and frames of various shapes. This is the case of this deflagration, a sort of chromatic atomic reactor which, starting from the center of the composition, spreads up to invade the frame, thus violating the traditional boundaries of pictorial practice, giving yet another proof of freedom as a creative foundation capable of crossing entire research conducted over the years by Accardi.