Large fire majolica of 38 x 29 x 18 cm, datable to 1920 – 23 ca. Union of Italian Artistic Industries, Rome. Under the base in a rectangle imprinted in the paste the inscription SIAI / Rome. Provenance: Cipriano Efisio Oppo.

At the transition between the nineteenth and twentieth centuries the Decorative Arts acquire a new dignity and the small format sculpture, which can also be placed in private homes, becomes a fundamental piece of furniture. Its production is vast throughout Europe: made of bronze, wood, ceramic these small works represent the most varied themes. But it is the animal, which has always been the protagonist of the human figurative imagination, which in the early twentieth century became a particularly important subject, so much so that, in France, a separate category of animal sculptors emerged, which in Paris will have its own exhibition halls. Although animalistic sculpture, as a specialty, will not enjoy much consideration from traditional critics, it has nevertheless acquired its own artistic dignity, and sculptors such as Rembrandt Bugatti and Alfredo Biagini show that the boundary between pure art and decorative art is very blurred. 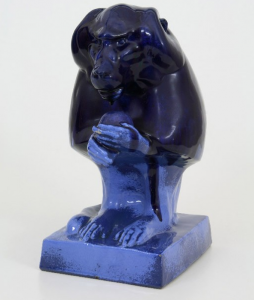 In particular, Alfredo Biagini for a long time dedicated himself to the theme of animals, depicting above all the felines and quadrumans that he interpreted, beyond the naturalistic objectivity of the subjects, with physiognomic and mimic characterizations: elements derived from the study of comparative anatomy and studies from true in zoos. At Villa Strohl-Fern, on the occasion of the IV International Exhibition of Art of the Roman Secession held in 1916, he exhibited the well-known marble sculpture veined the hamadryde, portrayed crouching with a fruit in hand, then re-proposed in numerous ceramic and other versions materials. This small production can be traced back to this small ceramic hamadryde, treated with glazes of different shades, from the collection of Cipriano Efisio Oppo. The choice of such a particular animal was part of Biagini’s more general interest in rare species and related to distant territories, which reflected the taste for the exotic of 19th century derivation, still strongly shared by the artists and the public of the time.

Biagini’s fame as an animalist consolidated in June 1918 at the exhibition in the Casina dei Pincio, organized by Marcello Piacentini, in which he represented, together with Attilio Selva, the “new Roman sculpture”.