Watercolor on paper cm 75 x 133 signed (A Battaglia), situated (Roma) and dated (1900) lower right.
On the back, label which demonstrates the exposure of the painting at the annual Munich exhibition held at the Glaspalast in 1903.

Alessandro Battaglia was initiated into art by his grandfather Roberto Bompiani. Subsequently, although bound to the school of Cesare Maccari and Ludovico Seitz, he adhered with interest above all to the realism and dramatic style of Domenico Morelli, who was passionate about it with his skillful and intense colorism. At the age of thirteen he took part in the exhibition of the Roman Society of Cultors and Amateurs in 1883, with a conventional “Portrait of his sister”, later taking part in almost all the Italian and foreign exhibitions, including that of Berlin in 1896, where a his watercolor, “Livia”, was purchased by the Magdeburg museum, while the large painting “Final Exams”, of a pathetic sentimentalism at the Toma, was exhibited and sold in Monaco.
Until the beginning of the 20th century, Battaglia appears to be a naturalist with a Michettian imprint in the numerous paintings of peasants and shepherdesses. Later the Roman artist approached the researches of divisionism which, in his works, however, does not find easy agreement with the luminism of academic origin; an example of this is “Spring Morning”, exhibited at the invitation of the IV Venice Biennale (1901) and purchased by the National Gallery of Modern Art in Rome, and “Contrasti”, exhibited in Barcelona in 1902. In 1903 Battaglia was among the artists invited to the annual Munich exhibition: on this occasion he exhibited three paintings, “Grape harvest”, “Nennella” and “End of the day”. 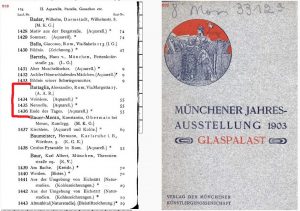 Just this last work can be identified in the painting presented here, because of the scene represented and the label on the back. The peasant community of the Roman countryside is seized at the moment of leave from the hard work of the fields: the day comes to an end after the harvest, whose harvest, the bundled bundles of wheat lie on the ground in the foreground on the right. The composition is wise, built following the rigid scan of the perspective planes, with the different characters that, starting from the two monumental female figures, slope down to the bottom, losing tone and color density; how remarkable is the painter’s acribia in outlining some of the details of the figures: for example, the colorful floral embroidery of the apron worn by the popular woman facing backwards in the act of calling to herself the workmates, virtuosity of the palette adopted by Battaglia. A painting, therefore, crucial in the painter’s artistic career especially if we consider that in 1904 Battaglia was among the founders together with Enrico Coleman and Onorato Carlandi of the “XXV of the Roman countryside” group, the famous milieu of artists who wanted to return to painting landscape, understood not in an academic sense, but as a true recovery of landscape motifs. Battaglia entered the group with the nickname “marine calf”, for his somatic traits, devoting himself to animated scenes of the Roman Agro which he loved deeply and which he portrayed with feeling and vigor coming out of the closed of the study to collect the inspirations in the shadow of ruins of the Roman aqueducts and to translate the vibrations it received from “open air”.