“Ziveri’s realism has never undergone vain abstractions or political polemics. It is the poetry of reality that of Ziveri, not a chronicle of reality”. Thus wrote Romeo Lucchese in 1952 about the artist’s painting. After his debut at the age of twenty at the Exposition of Fine Arts, in 1933 Ziveri exhibited at the Galleria Sabatello in Via del Babuino in Rome, together with Pericle Fazzini, obtaining a good critical success. In 1934 Ziveri matured a personal poetics, finding his way in tonality. Influenced by the painting of Piero della Francesca, which Roberto Longhi had brought to the attention of critics in those years, the artist dedicated himself to the search for a profound spiritual dimension and a new plastic sense, intended as a conquest of the spatial sense and light. 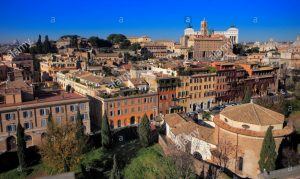 In 1937 Ziveri decided to undertake a trip to Paris, on the occasion of the International Exhibition, which will then take him to Belgium and Holland. It will be a fundamental experience, which will produce in his painting a profound change, as he himself will remember in his memoirs: “in Belgium and in the Netherlands I learned a lot, not only from Rembrandt and Vermeer but also from all those Dutch and Flemish artists wrongly considered ‘minor’ that go to the bottom of reality in their profession”. Back in Rome with the war on the doorstep, a source of inspiration for his urban views are the flowerbeds and the market of Piazza Vittorio, a stone’s throw from his home in via Conte Verde. In these glimpses of a late-Thirties Rome, Ziveri founds his poetics on a “new realism,” as Guzzi, his adventure companion, wrote.
It is precisely this new realism that can be traced back to this Roman glimpse, dating back to around 1937, taken from via di San Teodoro, before the demolitions and demolition of the fascist regime. In the glimpse of the urban landscape, built through a ductus pasty and earthy, you can see, beyond the medieval buildings, the profile of the Victorian, while in the foreground the shadows projected on the asphalt, on which lies a car, refer to the Syrian melancholy disquiet of a metropolis condemned to a profound mutation.