The formative process of Alberto Fabbi coincides and is closely intertwined with the activity of the younger brother Fabio. After completing his studies in the painting course at the Academy of Fine Arts in Bologna, Alberto moved to Florence, in the same years, specializing in portrait and painting of oriental subjects.

At the first and third edition of the Exhibition of Fine Arts of the Society Francesco Francia (1896-1897) – in years when the symbolist “conjuncture” was very much felt in the Milanese pictorial milieu – a room was entirely dedicated to the Fabbri, who exhibited paintings of oriental themes, where the element of exotic curiosity is revealed. Just Alberto Fabbi, representative of that orientalist pictorial current referable to Alberto Pasini in the area of Emilia, practiced a constant adherence to the picturesque genre, combining the themes of exoticism and travel with a quick and lively sketches.

Topics that he was able to deepen and bring back to the canvas with a marked documentary sensitivity, strengthened by his transfer to Alexandria in Egypt, where he lived for a long time: portraits and Egyptian and Arab costumes, written with descriptive taste and bright tones of color crowd his numerous compositions. Among them these is the painting presented here that allows us to enter a harem of Cairo, where luxuriously dressed women are attracting the attention of a group of men seduced by their disturbing dance. The work embodies the triumph of the male erotic imaginary on the oriental woman, on the “bayadera”, the name given by westerners to Indian and Arab dancers who performed in religious and secular parties and ceremonies. 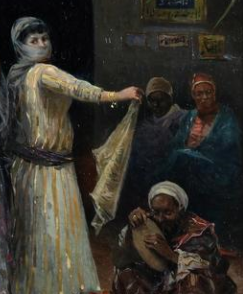 Portraitist (Cardinale Svampa, Quirico Filopanti, Vicini, Ceneri, datable between the 1880s and 1890s and also the portraits of Emilio Filopanti and Carlo Musi, 1897, at the Modern Art Gallery of Bologna) and illustrator, Alberto Fabbi is very young in the group of Bolognese satirical designers of the magazine “Il Natale della lira” (Bologna 1898), an interesting example of Art Nouveau graphics, which imitates in the format and layout the catalog of the first exhibition of the Viennese secession.