In 1907 the Bologna company “Francesco Francia” announces the competition for the project of completion and decoration of the salon of Four thousand of the Palazzo del Podesta, the most prestigious Bologna building: the painter, engraver, illustrator and printmaker Adolfo De Carolis, already student of D. Ferri at the Academy of Fine arts of the regional capital, submits to the committee – whose members were L. Bistolfi, I. B. Supino, G. Moretti, G. Bacchelli – his work  marked by the motto “Savena” – the name of the river which together with the Rhine borders the territory of the city of Bologna – curated in the architectural part by R. Brizzi: the project, able to sum up perfectly the “history and splendor of the city of Bologna”, won the first prize and in 1911 begins to take shape and construction.

The decorative undertaking engages the artist for about twenty years from 1908 until his death, with long and ups and downs, becoming a central work in the De Carolis artistic production.

The operation, led by Adolfo with his brother Dante, great and consistent “imaginary synthesis”, “fusion of styles in a superhuman vision indifferent, celebratory” (Solmi, 1979), reaffirms the total reversibility and ductility of his art; the nature of “decorator”, that, far from being a negative connotation, it is proposed to its same saying as “the style that reveals every great artist and melts under an equal sign revealing all the different artistic expressions”. 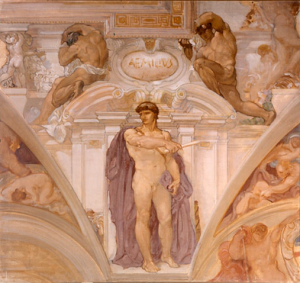 The male nude, taken in torsion, presented here, embodies an important document to rebuild the gestation of large decorative work undertaken by De Carolis: in fact it constitutes a study for the figure of Telamon, located at the top right, in one of the vaults dedicated to the great men of Bologna, and in particular, to the corbel in which insert the consul Marcus Lepidus, representative of the Emilian people, portraited with a long cloak over his shoulders, framed by three-quarters, in an upright position, with the arm right stretched forward to trace the via Emilia.
In the oil sketch, the monumental effect of the male nude maintains the consistency of the muscles giving the limbs an even more powerful material survey for the adoption of local accumulations of matter that in the fresco will be diluted for the adoption of lighter and evanescent hues similar to watercolor nuances: the clutter of the mighty anatomy of the telamon, while anchored in Michelangelo’s models, anticipates the disintegration of form, typical of Bacon’s production, especially in the terminal agglomeration of the figure, acting as a link between the Renaissance ideal and the dramatic condition of modern man.