Screen printing with intervention. It has a dedication in the lower right corner: “a Elda con molti auguri per il 1978”.

“At the center of Maria Lai’s artistic research – recalled Eike Schmidt, director of the Uffizi Galleries, where last year a great retrospective was held dedicated to the Sardinian artist – is the most typical means of his work, that is the thread that ‘binds and links’ in a way that is certainly alive and that in fact often remains free and not yet sewn: among the various mythological references, Penelope can only remember weaving during the day and into the night melts the threads ”.

The loom, the millenary instrument of weaving, already appears in a drawing from the 1940s by Lai and figures of weavers meet in his subsequent papers. But it was at the end of the seventies that Lai began the cycle of sewn canvases, true collages of knotted and basted fabrics, of large dimensions, gradually becoming more and more abstract. In parallel, he began working on two series of object-books, however illegible: those “bound” in bread dough baked in the oven (from the late seventies), almost to make the content edible, and those embroidered with sewing machine, imitating with the needle the linear course of the writing, from which it lets hang tangles of colored threads as in the work, “Libro Scalpo”. 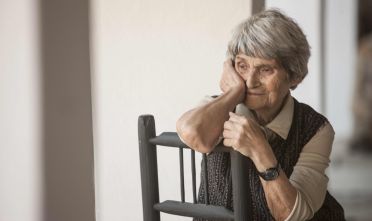 1979 is, instead, the year of his first environmental intervention “La casa cucita”, Selargius (Cagliari), followed by many other interventions on the landscape such as “Legarsi alla montagna”, Ulassai, 1981, a surprising alternative to the mayor’s proposal who had requested a monument. Maria Lai, starting from a local legend, unites with her fellow citizens all the houses, one with the other, and the houses to the looming mountain that crashes, with 26 kilometers of blue ribbon: work that will be worth the title of founder of the relational art, assigned to it by contemporary artistic historiography and the most recent criticism.

The two works presented here deal with the same theme: the importance of the recovery of child drawing, the lost innocence, a search for primitive palingenesis, central to the artistic research of Maria Lai. A child of bread, coming from a universe in continuous evolution, comes to life in the first work, a tiny solitary point in the chain of humanity: it contains in itself the infinite that is accessed with another birth. The second work shows us the drawing of a child, in which the Virgin Mary looks like a mother: around threads, like embroidery, still envelop the time of innocence. The two works lead back to a concept dear to Lai: “every day we kill the child in us, every day our cells are renewed and they forget the origin: it is up to us to preserve that innocence”. An innocence that coincides with salvation, whose path to arrive is precisely in the thread that leads us back to the universal frame, a metaphorical umbilical cord of the entire humanity.