Trained at the Accademia di Brera (1855-1863), where he followed the courses of Giuseppe Sogni, Francesco Hayez and Giuseppe Bertini and found as his fellow students some of the early 19th century Lombard paintings such as Tranquillo Cremona, Daniele Ranzoni, Filippo Carcano, Mosè Bianchi, Ernesto Fontana makes his debut on the national artistic scene by painting historical paintings, including “The arrest of Gerolamo Morone” (1860, Milan, Brera Academy), “The last hours of Catherine of Aragon” (1862), and “The meeting of Elisabetta and Maria Stuarda” (1872), awarded in Ferrara in 1875 with a gold medal.
Abandoned historical subjects, he devoted himself mainly to genre scenes, in the wake of Domenico and Gerolamo Induno – considered true cornerstones of anecdotal painting-, whom he is linked by friendship. There are innumerable genre paintings, but also portraits, which decree his success with the industrial and commercial bourgeoisie. The taste for anecdotal also derives from the collaboration with important periodicals such as “Nature and Art”, “Lo Spirito folletto”, “The Italian illustration” and “The universal illustration”. His work as a freschist is also in great demand, as it owes him prestigious works entrusted to him by various noble families or the upper class of Milan (Erba, Chiesa, Borghi). In 1873-74 he took part in the national exhibitions in London, a city in which he was very appreciated by collectors. 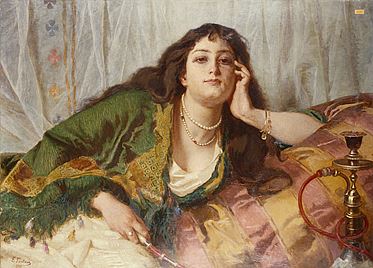 Just the success recorded abroad induces the painter to tack on subjects more attractive to the international market. This is the case of this Odalisque, testimony to a stylistic turn of the Fontana towards the orientalist culture that crossed Italian painting of the late 19th century. In this disturbing and not without malice female figure, emerge the essential features of the Fontana portraiture: compositional harmony, attention to the truth, formal refinement, but also psychological penetration coexist in this canvas, in which we can recognize the painting that, with the title ” In the harem ” (cat., p.74), was exhibited in 1894 at the II Triennial Exhibition of the Academy of Brera, awarded with the gold medal. Bearing witness to the importance that this painting has embodied in the painter’s career, it is worth recalling a second version, today in Bellinzona, in the Canton Ticino, performed years after by the painter shortly before his death, in 1913: one last work to indicate the veneration that the painter himself had for this Odalisque, able to open him the doors to international success.