The paintings of Amedeo Bocchi tell of an Italy made up of small moments of daily life, the fatigue of life in the fields, the dazzling landscapes of a country that no longer exists. The protagonists of his paintings are the family, the thousand portraits of his daughter Bianca who died prematurely and the two wives, Rita and Niccolina, or the scenes of middle-class women, portrayed with large hats, long and luxurious dresses and in constant search for themselves, like in one of the three paintings by the painter from Parma presented in this section, whose protagonist is the noble and austere figure of an elegant Roman lady, whose imposing profile stands out on the panorama of Rome dominated by the dome of St. Peter’s.

Animator, especially from the twenties, of Italian artistic culture, present at the Venice Biennale since 1910 and author since the first decades of the century of works and cycles of exceptional importance, for the intrinsic quality and for the updated and original participation in the European context, the artist, although appreciated and studied by important critics and scholars, does not yet have the place he deserves in the historiography of that period. 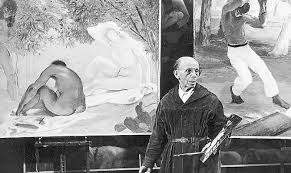 Born in Parma in 1883, Bocchi soon moved to Rome, where he began as a boy in 1902, to attend the Academy of Fine Arts’s Nude School and to remain there until his death, in 1976, in the study house in Villa Strohl Fern, in the park of Villa Borghese, assigned to him, like other artists of great name, in 1915. Just a glimpse of Villa Strohl-Fern acts as a theater for the vaporous Roman noon executed by the artist in Bocchi’s second painting presented here.

Since the early years of the twentieth century Villa Borghese became his privileged, reserved and protected space, but also in the heart of a lively and pulsating city, which stimulated and nourished him, offering him important professional opportunities, which were added to those, numerous, which they came from institutions and collectors from other regions, starting right from their native Parma and nearby Piacenza, where Bocchi found an intelligent and open patron, Giuseppe Ricci Oddi, who bought him some major works, still preserved in the Piacenza museum founded by the collector and by he donated to his city. Among the artists with whom Bocchi found an intense particular figure, Latino Barilli, from Parma like him, with whom in 1911 he reconstructed the Golden Hall of the Torrechiara Castle for the Ethnographic Exhibition of Rome. It is to Barilli, immortalized in a profile constructed with shrewd strokes of light, that the portrait presented here is dedicated, the last of the three paintings by Bocchi presented in this section.