Self-taught, Grassi attends Balla, Carlandi, Prini, Prencipe and Cambellotti, establishing a long and fruitful relationship with the latter that will last a lifetime. Since 1904 he is part of the XXV of the Roman Campaign. In 1906 he has a personal room at the exhibition of Amateurs and Cultori and exhibits in London at the exhibition “The Roman Quartet”, with Innocenti, Coromaldi and Coleman. In 1906 a long collaboration began with the Teatro dei Piccoli of Podrecca. He is one of the founders of the magazine «La Casa» which promotes a radical renewal of furniture and living spaces. For Rome capital, from 1911 he created works and decorations between archaeological reconstruction, medieval mysticism and exaltation of Rome. He linked theatrical technical innovations to the architectural and visionary sense of his painting, and set up the “Macbeth” for the Costanzi Theater in Rome in 1911.

The following year he exhibited at the “I Exhibition of artistic stained glass”, where his collaboration with the artisan Cesare Picchiarini originated. From 1912 to 1949 he taught pictorial, ornate, decoration, set design and engraving technique. Promoter of the Roman Secession, he exhibits furniture, stained glass windows, paintings and furnishes some rooms. Between 1913 and 1915 he was responsible for reorganizing the National Gallery of Modern Art, planning some preparations. Re-qualifies the relationship between project and realization by participating in the International Exhibition of Monza (1923). He is called to direct the artistic section of the Treccani Encyclopedia. He decorates the G. Eastman Institute, the churches of San Paolo and the Saints Pietro and Paolo, the buildings of the Notariat, the INA and the SIAE. Recurring motifs mark the Grassi’s artistic path: melancholy of the past, inseparable from the greatness of the spirit and the feeling of beauty in art; the theme of ascending to a high area, culminating and closer to the sky that is observed in the humoral changeability of the passing of the clouds, of their thickening and expanding, like shadows of feelings on a human face; the perspective cut where the bottom-up view is preferred; the Roman sunset, livid, tinged with red and sulfur, the moonlight and the nocturnal setting. 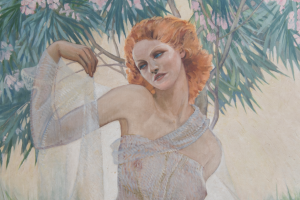 The illustrations follow a pre-Raphaelite line updated in a Déco key, which can be found above all in the forty original watercolors that Grassi created for a prestigious edition of Dante’s “Vita Nova”, published in 1921. It is within this last sensibility that this elegant, at the same time, majestic, squatting female figure, crossed by a sensual languor, accentuated by the transparency of the veil, illuminated by the glow that pervades a profound communion with nature can be inserted. Vittorio Grassi’s vein touches in this remarkable work the timbres of an increasingly boundless mysticism in the fable that cancels any conflict between reality and unreality, in which scene and event are out of time.