The drawing is accompanied by a photo of Vincenzo Gemito with a handwritten dedication written by Giuseppina Gemito in April 1929.
“It is in the Neapolitan sculptor Vincenzo Gemito that Italian art of the second half of the last century had its more robustly and tastier than plastic illustrator. […] In the period of his full sanity, he has always succeeded, even in a quick outline or in a simple profile, to give clear and persuasive evidence of possessing precise and intense frankness the feeling of reality and to know with complete fidelity, in the spontaneity of the pose and in the instantaneousness of the move, the human creature, naked or dressed as it is. […]. Modeling, with elegance of planes and with typical effectiveness of expression, a head, a bust or an entire figure of a man, a woman or a child and make “evident” […] The production of Vincenzo Gemito, presents so much originality and he has this merit to establish his leadership on the Italian sculptors and illustrators of his contemporaries and to assure him a place of honor in the world history of fine arts in the nineteenth century”. With these words, Vittorio Pica, on the columns of the magazine “Emporium”, exalted in 1916 the genius and creative fury of Vincenzo Gemito. 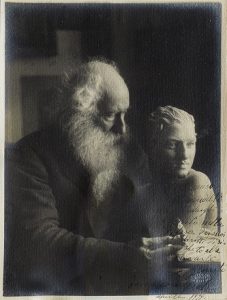 It is a study of virile nude with a strong sensual charge, the one presented here, a genre in which often the great Neapolitan artist has ventured throughout the entire span of his career: the interest in the male anatomy occurs in many drawings from the seventh decade of the nineteenth century until his death, which took place on the threshold of the thirties of the twentieth century. To the drawings of intense naturalism of the young years, a graphic production takes place that starts from the study from the truth to finally arrive at an allegorical or religious declination of the nude.
This drawing is characterized by the fastness in the execution and the freshness of invention in the construction of the figure and in particular in the oval of the face, framed by the left arm, the newly defined disembodied curls, the half-open mouth, vertex of languor running through the whole body mass, modeled on a sinuous line, built to chiasmus, summit of the reflection conducted by Gemito on classical sculpture.