The work presented here reflects the pictorial style of Tancredi centered on an increasingly evident fragmentation of the sign and on a bright chromatism, a driving element in the canvases. The energy of the stroke, combining with the luminous vibrations, creates a new harmony that corresponds to one of the happiest periods of the artist’s production, the early fifties, during which while remaining independent, he subscribes to the manifesto of the Space Movement together with Lucio Fontana. Present in these years in the Cardazzo galleries in Venice, Milan and Rome, his works have entered prestigious international collections. The exhibition that Peggy organizes at Palazzo Venier dei Leoni is crucial in 1954 and consolidates the fame of the very young “artist”. She remembers the collector in her autobiography “A life for art”: “[..] then finally developed a very personal style: it was what in Italy is called a spatialist and her gouaches soon filled my house. They were delicate and airy [..] “. Tancredi was always attracted by the combinations of bright colors, by informal inventions which, thanks to an incessant brush and a painting full of life and vibratile intensity, occupied all the spaces of the canvas. 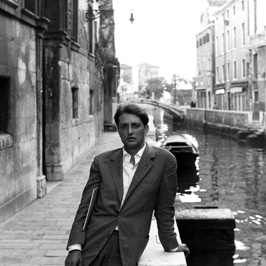 A further segment of experimentation, in the final part of his short life, is that of the painted collages, executed between 1962 and 1963, the so-called country diaries and the “Flowers painted by me and by others at 101%”, which are rightly to be considered examples of exceptional creative vigor and dramatic euphoria. Immersed in the climate of the new painting of the 1960s, Tancredi in open controversy with it builds new “anti-heroic” paintings, imbued with color that now becomes a stain, now an image, capable of alluding to war, to the news or to large flowers. It is these works that close the extraordinary, brilliant and unregulated path of Tancredi’s painting dedicated to nature and man. Paintings that in their disquieting chromatic happiness foreshadow the last year of the painter’s life, among the most original and unclassifiable personalities of Italian and European painting of the 20th century. Tancredi died in 1964 at only 37 years old, very young and ready to enter, as Dino Buzzati writes, in the “myth of Tancredi”.