Brother of Giovanni, also a painter, Romeo, after a few years’ stay in Bologna, received a first artistic training at the Art Institute of Reggio Emilia, as a pupil of Gaetano Chierici and Cirillo Manicardi. From 1891 to 1895, he went to Florence and Naples.
He traveled a lot between 1900 and 1903, coming into contact with the European artistic circles. It was during a Parisian stay that he refined the difficult technique of the monotype, impression in a single example from a metal plate painted with liquid colors, used by Edgard Degas. In 1904 he exhibited at the Society of Fine Arts in Florence the painting “The Dream Soul”, much appreciated by critics. It was the launching pad for his definitive affirmation: in fact he participated in twelve editions of the Venice Biennale and in 1909 for the first time with a monotype, “The flurry”. 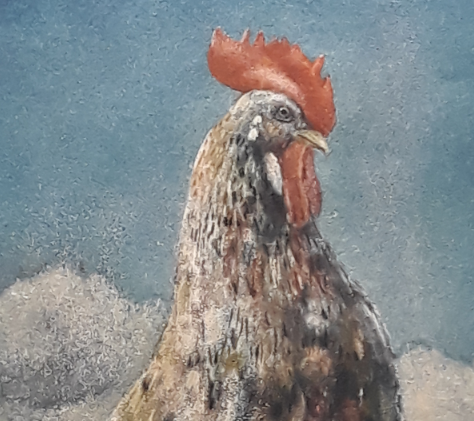 In 1921 he was among the protagonists of the Fiorentine Springly exhibition together with Giorgio de Chirico and Carlo Carrà. In 1930 he participated with the major Italian artists in the “Exposition de la gravure and de la médaille italienne contemporaine” in Paris. In Italy and abroad his monotypes depicting masks, evocative of an eighteenth-century Venetian carnival, and different animals were particularly appreciated. It is precisely in this last area of production that the two works presented here can be traced back, two admirable studies conducted by the Emilian master from which his passion for the animal world shines: a rooster and a falcon juggler, depicted with absolute acribia and approach lenticular to the observation of the natural element. The profiles of the two birds grow inside the painted space, assuming a solemn aura that, in filigree, celebrates the beauty of the mysterious code of nature.
In the last part of his earthly story, Costetti moved to Rome where he took part in numerous editions of the Quadrennial and joined the circles linked to the Roman Secession.