Olio on plywood panel cm 70 x 100, signed (R NATALI) lower right. On the back, signature, title and label of Cocchini Gallery in Livorno

Renato Natali, the last of postmacchiaioli painters, represented in his paintings almost always scenes and environments of the city that saw him born, Livorno, without fail to appreciate even glimpses of Rome, a city that he often painted in memory in his home in via Gramsci in Colline. The sunsets of fire, the calm afternoons, the landscapes flooded by the moonlight or the silence of the alleys, between lurid and fallen palaces, are evoked with expressive immediacy, thanks to the brave use of pure colors, coupled without worrying about fonding them or blur them.
It is precisely in his hometown that this splendid panel of the Labronian master is dedicated: one of the many powerful narratives of life lived between the popular streets and the port that Natali has on the stage of the city of Livorno, where the wings are made up of nineteenth-century palaces and reflectors from the lights at sunset that, in this case, color the doors of the shops and the profiles of the passers-by that populate the different perspective floors of the entire scene. 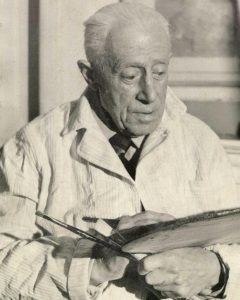 Born in 1883, Natali began painting as a self-taught artist and at the age of twenty-one he received the first public awards. His first participation at the Venice International Exhibition is in 1905 and will take part in many editions until the 1930s. On external advices he dedicates himself to graphics and engraving and is invited to attend some international exhibitions. In 1913 he went to Paris where he stayed for almost a year, shaking his friendship with Amedeo Modigliani and several French painters. For all the 1920s he participated in national exhibitions in Rome, Milan, Turin and is among the founders of the Labronico Group.
Beloved by the Livorno people who have at least one painting in each house, today he is a national artist, sought after by the refined collectors of macchiaioli and post-macchiaioli painting. This is confirmed by the remarkable result of one of Natali’s latest auction passages: in fact, last May his exceptional oil on canvas “Shadows and Sounds” beat every record, handing over to 65,000 euros during the last sale session from Pandolfini.