Graphite and pastel on panel cm 53 x 177 signed (P Ruffo) on the back, with artist’s authentic on photo.

Graduated in architecture, Pietro Ruffo lives and works in Rome in the former Pastificio Cerere, a famous industrial settlement of the early 1900s restored in the 70s by a group of artists who have transformed it into an important art workshop and cultural initiatives. Starting from the physical modality of the design and passing through the installations and videos, Ruffo freely uses numerous expressive techniques as instruments of investigation that allow him to scan and synthesize reality, transforming it into a vision of the world full of suggestions.

Outside of his atelier, he also realizes numerous site-specific works in Italy and abroad using territorial maps and documents as a basis for study and social analysis of the places to be represented. His works do not offer a personal synthesis, but an open view of the various stages of the research process. In this context, she participates in workshops with both the children returning from the 2004 attack in the No. 1 school in Beslan and the children of Sarajevo, and elaborates a proposal for a memorial of the victims of the World Trade Center at Ground Zero and a project for the patients of the Colmar psychiatric hospital in France. 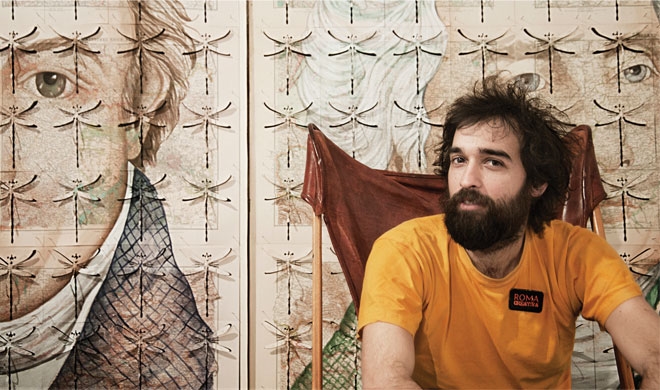 From the end of the 90s to today Ruffo holds numerous solo exhibitions and participates in important collective exhibitions and workshops both in Italy and abroad winning the Cairo Award in 2009 and the New York Award in 2010, and always winning a research grant in 2010 at Columbia University in New York.

Exalted by the world of art and critics, it is sought after by collectors and sponsored by the most refined and snobbish côté of the ephemeral world of fashion. Maria Grazia Chiuri, Valentino’s former creative director, chose him, in 2015, for the scenographic staging of Memorabilia, the fifty-year fashion show for the Roman fashion house in piazza Mignanelli, and now that she has moved to the helm of Dior, he also took him to Paris, making him create specially painted canvases and wooden animals stolen from the jungle for his enchanted garden at Les Invalides.

The one presented here is a play on humor, a divertissement based on a sarcastic paradox given by the representation of a crocodile on a surfboard, an ironic coincidentia oppositorum that reveals the interest of Ruffo for the animal world, constantly present in the works created by the Roman artist in recent years.