To the sculptor Pietro Küfferle, whose 70th anniversary of death occurred in 2012, was dedicated in April of that year, at the Center for Art Otello Cirri of Pontedera, a study seminar and an exhibition entitled “Pietro Küfferle sculptor of the Tsar”, an event born, as the sculptor’s nephew Piero Fassorra declared, to “make the works of this man who left Russia very rich and arrived in Italy with nothing, so much so that he had to sell the fur he was wearing to buy some food, and that slowly he found the strength to get back on his feet, leaving us important evidence of his creativity». The Pontedese exhibition was an important occasion, since for the first time the works exhibited in a private collection were shown to the public, including the unusual alabaster sculpture depicting “L ‘anacoreta”, already in a private collection in Warsaw.

Pupil of the sculptor Grazioso Spazzi, Küfferle, active in different parts of Europe from a very young age, had important commissions in Russia where he was appointed director of the Tsar Nicholas II school of sculpture, a position he held for 16 years. In 1917 he came to Pontedera as a refugee from the Russian Revolution, following the eclipse of the Romanov dynasty, accompanied by his wife Anna Budajtis and his son Rinaldo – future important literary critic, poet and journalist – who learned precisely in Pontedera, as can be seen from the memories of his teacher Maria Tizzi, the Italian alphabet. In the city Küfferle created numerous works, including the four Evangelists placed in the external niches of the Duomo, which constitute an interesting – but still largely unexplored – chapter in the history of early twentieth-century art. 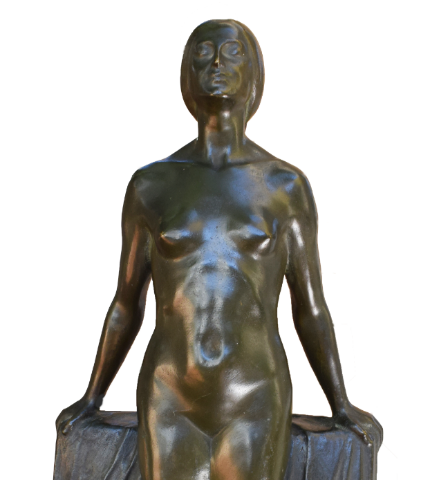 The work presented here embodies one of the most significant testimonies of Kufferle’s symbolist sensitivity. The title, moreover identical to that of a work executed by the great Auguste Rodin at the end of the 19th century, charged with romantic suggestions a passionate theme like that of the exaltation of the eternal feminine. The raised position of the woman (almost as if she were on an altar) and the devout pose of the men, whose outlines emerge from the drape that covers the base, give a sacred value to the scene. The bronze seems to merge the sensual and angelic dimension of the woman (probably an iconographic reference to the famous biblical episode of Susanna and the Elders), not so much to polemicize or desecrate, as to look for the signs of a deeper dimension within reality, which it did not necessarily require a logical explanation.