“His abstract paintings are intricate compositions of color, line, space and form, of unquestionable charm, often enlivened by the experiment, that are not ashamed of any mark of decorativity, and full of purely pictorial problems: the relationship between image and background, between image and canvas, the emotional potential of the stroke, which, if not baroque, is at least in perpetual movement, the dialogue between pre – conceived method and intuition. All this and its crystalline titles that, once explained, are revealing. These titles can be autobiographical from the point of view of the painting […] “(Rynalds 1986).
Precisely the temporal scan, the inexorable flow of time, the spatio – temporal interpenetrations, central in the artistic production of Dorazio, those “broken horizons that tend to unite or detach themselves”, according to the definition that the artist himself gave of his jagged linear background of color, constitute the theme of this canvas, dated 1967. 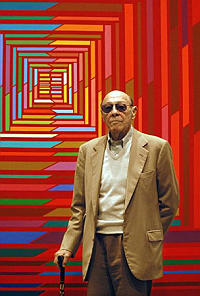 Just at the beginning of the Seventies, Dorazio made a series of works dedicated to the hours (Hora I, II, III), which shows his particular perception of time, already revealed in a writing of the late fifties: “My grandfather’s watch was that of his father and thus his ideas to be implemented, which limited his life between one object and another […]. I had the watch in exchange for a checked jacket. I continually destroy objects, others I create with imagination, changing the order and aspects of my uncertainly moving world in many directions during every fraction of a second”.
The work presented here is part of the American period of Dorazio, which characterized the definition of the poetry of the Roman artist: from 1960 to 1969 he taught at the School of Fine Arts of the University of Pennsylvania and other American universities, before return to Europe, to Berlin, where he teaches at the Deutsche Akademische Austanschdienst.