A half-length young woman portrayed on her shoulders, the profile barely visible thanks to a slight twist that shows the observer gentle features of a face reddened by the Mediterranean sun. Dressed in an emerald green tunic, fastened by a clasp at the left shoulder, the crown of raven-like curls collected in a blue handkerchief dotted with star-shaped motifs. A mystery envelops the protagonist of this small-format painting, as well as the natural space outlined around her profile: sky and sea seem to merge into a single celestial veil that completely covers the surface of the picture, illuminated in the center by soft glares of an afternoon sun.

Precisely starting from a careful iconographic analysis of the painting presented here, it is likely to assume a paternity of the work attributable to the hand of the English painter and illustrator Norman Prescott-Davies. Born in Isleworth, Prescott-Davies attended London International College and South Kensington. Elected member of the Royal College of Art in 1891 and of the Royal Society of British Artists in 1893, the British artist is known precisely for his production characterized by an innumerable series of female portraits influenced by the style of John William Godward, English painter, working in the final phase of the pre-Raphaelite / neoclassical period. 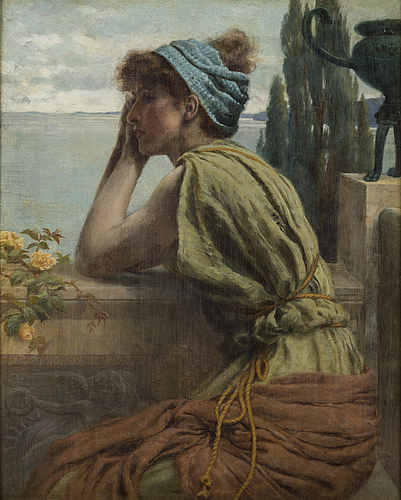 Like Godward, Prescott-Davies also appears, in the many portraits dedicated to the female world, as a follower of the theories of Frederic Leighton, but with a style closer to Alma-Tadema, with whom he shared a strong passion for classical architecture, and above all for the marble structures. In most of his works, always sumptuous and full of grace, women in classic attire are represented on markedly decorative backgrounds, often on a marble terrace. There are also works in which sensual naked or semi-nude female figures appear (think of the painting “Nymph of the sea”, executed in 1904) and innocent and very tender depictions of the world of childhood and adolescence (for example the oil “Iris”, executed in 1906). The titles of his works – such as, for example “Greek Muse” and “The Oracle” – reflect the source of his inspiration: classical civilization, particularly that of ancient Rome, but also – sometimes – the Greek one, as a testimony of his, albeit reduced by the most recent criticism, links with Leighton.