Enamel and collage on canvas with painted frame cm 64 x 54 signed (Schifano) lower right, with inscription “x Antonio” and signature on the back. The work is archived at the Mario Schifano Archive, curated by Monica Schifano, with an authentic released on 30/04/2018.

The reflection of Mario Schifano on the landscape genre articulates his entire artistic career. By the early Seventies, the exhibition “TV Landscapes,” held in December 1970, shows the search for a pictorial language capable of merging tradition with the irruption of new media in everyday life: in the works exhibited at that time, he begin to bring video images directly on emulsified canvas, isolating them from the narrative rhythm of the sequences to which they belong and offering them up with touches of color to the nitro. Schifano says about this technique: “The process is long and elaborate. But only in this way I can get those effects of realism and visionary that I run after with the imagination.”
Next to a location of his figurative code into a modern “new objectivity”, careful to the human intervention in the urban space, marked by the increasing presence of mass media, such as films, comics, advertising, signage, Schifano made a series of views, the so-called ” anemic landscapes”, created since 1963: tales of flattened visions, where the color spectrum is impoverished and every descriptive element vanishes. Maurizio Fagiolo Dell’Arco wrote, describing these works by Schifano: “Nothing sky, no sunset, no context; or rather, the ghost of the landscape, the sunset, the sky “. 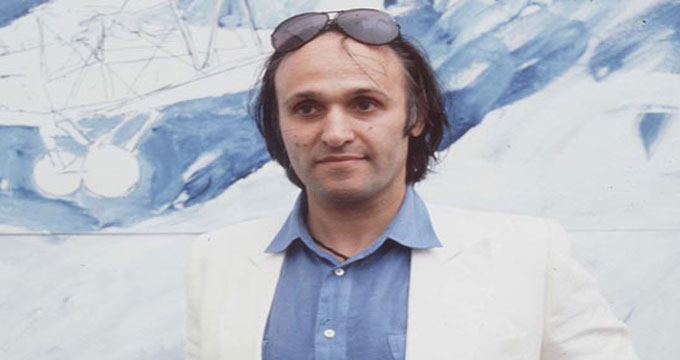 That same sky, absent in the works of the Sixties, returns as the protagonist in the work presented here, an anemic landscape, datable to the late 1970s, whose different color plans that dissect the entire composition invade the space occupied by the frame, thus subverting the conventional rules of the relationship between the work and the external envelope.
The work presents itself as a whirling impression of an open space that conveys a panic sense of restlessness and rebellion at the same time, where the magmatic pictorial drafting embodies the artist’s perturbing interiority. The material treatment of color, the violence of the drawing up of varnishes, the voids and the solids created by the chromatic clots make this landscape a significant work within the artistic production of a mature Schifano.