Abstract painter, capable of experimenting with the most diverse techniques, formed in the laboratories of Vicente Forte and Orlando Pierri, Mario Pucciarelli lived in London in the years 1955-1956. In 1958 he took part in the non-figurative art group exhibitions held at the H Gallery, at the New Art Association in the Van Riel Gallery. In 1959 he joined the top performers of the informal movement and exhibited at the avant-garde training exhibition held at the Pizarro Gallery, with Greco, Newbery and Méndez Casariego. He took part in the Biennale of the Young Rioplatense Art, in Montevideo, where he received the important Frank Lloyd Wright prize. The Biennale of the Pipino Foundation and Márquez of Córdoba gives him the second prize and in the Ver y Estimar Prize he is awarded the “Faja de Honor”. In the exhibitions of the Informal Movement, a year later, it presents some typically informal paintings, with thick layers of material, furrowed by signs and graffiti.

In 1960 he was present at the First International Exhibition of Modern Art, at the Museum of Modern Art in Buenos Aires and at the National Museum of Fine Arts. He settled in Rome in 1961. From that moment he took part in collective and biennial international exhibitions. It was presented and supported in Italy in 1961 by the Il Centro di Ischia gallery; in 1962, he exhibited at the Pogliani Gallery in Rome and at the Bonino Gallery in Buenos Aires. In 1963 he returned to the Pogliani Gallery in Rome; in 1964, he exhibited at the La Metopa Gallery in Bari and at the Lidingo Galleriat in Stockholm; in 1975, at the Galería Latina in Stockholm and at Gallery 54 in Gothenburg. 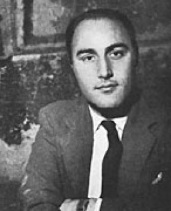 The work presented here falls within the phase of Pucciarelli’s artistic production considered of greatest interest in his training: only two years before, in fact, in 1960, there was the year of the definitive consecration of the Argentine artist, when he won the prestigious Di Tella Institute National Painting Award, awarded by Jorge Romero Brest and Lionello Venturi. Executed in 1962, this composition appears to be a work of great visual strength, made of expressive brushstrokes and multi-material overlaps: it presents the adoption of diluted inks and the application of vibrant colors that break the monochromatic and tonal concordance, configuring a mysterious cluster of chromatic and material densities. In addition, the underlying work incorporates fabric and cardboard in the pictorial surface, opening up new textures in a perceptible way, without losing the unitary vision that characterizes the image, from which emerge bricks that seem to want to suture open wounds in gauzes and nets positioned in the central register. As the artist himself has stated, his painting differs from “action painting” precisely because the creative process is sustained in another dimension of time, deeper and more settled.