The Novarese sculptor Luigi Preatoni was an established portraitist and ceramist who worked in Risorgimento and post-unitary Italy, present at the Annual Exhibition of the Society of Fine Arts in Milan in 1895 with the bronze sculptures “Roman Matrona” and “Odalisque” and at the Exposition National Fine Arts of Turin of 1898, where he exhibited the bronze sculpture “General Giacomo Durando”. His bronze “Umberto I of Savoy” from 1878 is kept in the collection of the Bergamo – Historical Museum. Many of his historical portraiture works are located in public places such as the marble busts of General Alfonso La Marmora and Agostino De Pretis at the collection of the Chamber of Deputies in Rome. 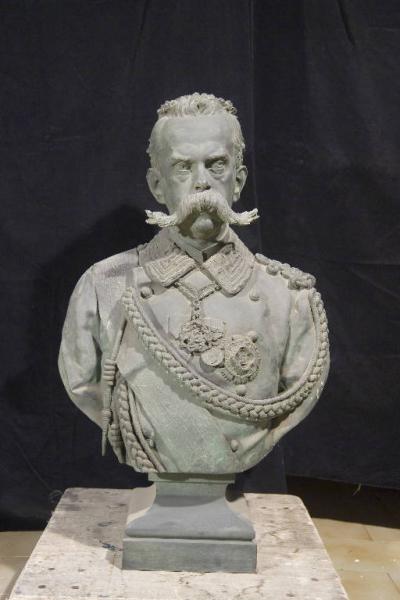 What is presented here, however, is a work that is part of the most anecdotal production of the Turin sculptor, populated by flirtatious female figures, the object of the amorous desire of suitors who from time to time alternate in courtship scenes. The marble shows the graceful face of a girl, slightly turned to the left, framed by a showy wide-brimmed hat embellished with a bow, whose flap falls on the laced collar, a masterpiece of virtuosity in the use of the drill.

The work, with its formal elegance and its expressive liveliness is the premise of that extraordinary creative ferment (expressed with particular focus in the field of sculpture) that invested Turin fin de siècle, disheveled and crepuscular (but already in the smell of art nouveau), up to the last great plastic season, that is the “neo-Latin” one of the Twenties. The causes of the exceptional nature of the Turin plastic fervor, which with its sudden opening to great European art contributed decisively to the provincial stale culture of the foothills, are numerous and very complex: surely the charismatic presence of some strong personalities (which were the most influential ones) Leonardo Bistolfi, Edoardo Rubino, Pietro Canonica and Davide Calandra) was the main reason for the influx to Turin of talented young people, coming from the rest of Italy and from the whole world; another decisive point (and too often underestimated) in encouraging the aforementioned flowering was the presence, in the city itself, of important art founders, often eccentric and paradoxical figures, obsessed with their boundless ambitions and the quality of their work (we think of Emilio Sperati, to mention only one striking name).