Karel Appel is one of the most important authors of the post-war Dutch and European artistic scene. Trained at the Rijksakademie in Amsterdam, he is interested in modern French painting in search of new modes of expression. 1948 is a watershed year in his artistic career: in fact, he founded the “Reflex” group with Costant and Corbeille and, above all, in that same year he gave life to the CoBrA movement (1948-51) with Asger Jorn and Pierre Alechinsky. The latter proposes an expressionism in an informal and ironic way, gathering together artists from Copenhagen, Brussels and Amsterdam with the aim of affirming a valid alternative to the rationalist currents. The rediscovery of primitive art, the return to a child’s art, the rejection of every academicism are the founding principles of a new language based essentially on the expressive power of color. Just as children would do, Appel expresses his sensibility through thick and pasty brushstrokes, in which the primary colors embossed predominate by the incumbent presence of black, exactly as in the work presented here, a manifesto of the recovery of unbridled immediate and lacking infant creativity free from cultural superstructures.
In 1954 he moved to Albissola (Savona) deciding to deepen his creative ability in sculpture by refining the technique of ceramics. Although his works appear at first glance as anthropomorphic figures similar to grotesque puppets, like crude animal-like heads, in reality the subject is immediately decipherable to the observer who resorts to instinct as a means of reading the work, the same instinct from which the artist takes his steps to be carried away by creative fury. The bitter and aggressive charge of the works of the 1950s is diluted starting from the second half of the Sixties and through the Seventies. 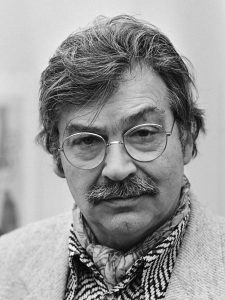 Appel does not shuffle the color on the canvas as he used to do before and gradually gives up the black. The draft becomes softer and the images become clearer and sharper. There is no longer the struggle of the past, but the search for space. At the same time the artist’s interest also extends to sculpture, adopting new materials such as polychrome polyester, painted wood and aluminum foils. Appel’s works record a return to harsh and aggressive painting, neo-fauvist in the 1980s that, conforming to some neo-expressionists, led him to amplify the dimensions of the paintings.