Giuseppe Rovani in 1855, in the “History of Letters and the Arts in Italy”, effectively reconstructed the reasons for the extraordinary international affirmation of Giuseppe Molteni in the field of portrait. As Stefano Grandesso noted, just then, however, the taste of the public and the critics was losing their distance from the masters of the romantic generation and the artist himself thinned the execution of paintings and participation in exhibitions to devote himself more to the other field of his activity, that of restorer and expert of ancient painting, who saw him as authoritative protagonist of the art market and listened to judges in the field of paintings, in relation to the great contemporary connoisseurs and conservators of foreign museums. 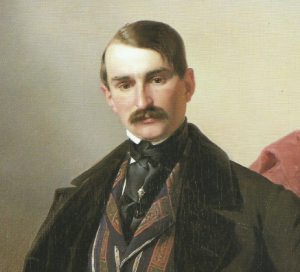 The typology developed since the Twenties had been that of the set portrait, where the portrayed character could satisfactorily recognize his social belonging and verify the refinement of his choices in the dress and in the surrounding furniture. Molteni himself was the arbiter of the taste and painter of fashion as well as of fashion in making the show stand out and making it stand out, a position achieved also through the skilful social relations and the ability to reunite in his own studio-museum, where he also hosted Massimo D Azeglio, soon engaged with his friend in the four-handed portrait of Alessandro Manzoni (Milan, Biblioteca Nazionale Braidense), the Milanese worldliness and passing European visitors.

This unsigned portrait is certainly his, as shown by the comparison with very similar paintings both on the formal and stylistic level and on the iconographic and costume ones, such as the portrait of Achille Padovani (private collection), that of Antonio Gavazzi (private collection), or that of the duke Giulio Litta (Milan Art Collections of the Ospedale Maggiore; Milan 2001, cat. num. 7, 25, 29), all dated around 1840 and the last with the same fund for half neutral and for half crossed by a rich brocade fabric which, as often in Molteni, expands towards the base of the painting and constitutes the sought-after tone of agreement or chromatic contrast of the painting. Here too the vivacity in the rendering of the features and the pose stand out on one side, attitudes to dignity but with cordial naturalness, on the other the splendid details of the dress: the tailcoat with the velvet inside with a very tight cut at the waist, the tie stopped by a brooch with a baroque pearl, the banded silk vest with green paisley motifs on an orange background.