Oil on canvas cm 165 x 121 signed (G Costantini) lower left. On the back, visible painter’s signature and title of the painting.

A less expressionist realism than that which characterizes the art of Aroldo Bonzagni, but marked by a crudity that refers to the atmospheres of the New German Objectivity, characterizes the impressive series of paintings dedicated to the war by Giovanni Costantini, painter who participated in the movement of the XXV della Campagna Romana. Close to Sartorio, in the first decade of the twentieth century he had created works of social denunciation such as “From the fields of rest” and “Sad crowd” (Ravenna, Academy of Fine Arts). Although he did not actively participate in the conflict, he was impressed by the drama and violence of those events and wanted to represent them in a series of paintings that, observing them as from behind the scenes, revealed their cynicism, horror and pain.

To a first group of symbolic compositions, entitled “The War”, “The booty”, “The military domain”, “The victory”, made in 1914, followed until 1921 the forty-three large paintings that composed the cycle “War tears”, exhibited at the Roman Biennale in 1921, where a personal room was dedicated to him. The crudeness of some of these works aroused violent polemical reactions up to the charge of defeatism. “The plan of attack”, “After the assault” and “Return to life”, characterized by a language that has the incisiveness and the visual power of the illustrated posters or of the cinema, make up a sort of triptych where the violent realism of the image is amplified by symbolic inserts as in the first of the three paintings where the figure of death with the big scythe and with a ferocious grin peers from behind a stained glass window a group of high grades intent on marking on a map the fate, precisely of death, of many men. 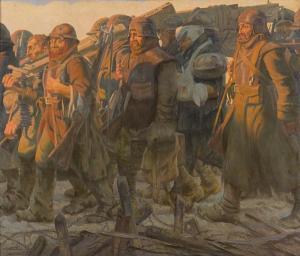 Those soldiers portrayed as ruthless automata and hopelessly marked by the cruelty of their condition in the terrible “After the assault”. While in “Back to life” the sadness of the wounded communicates only infinite desolation. On the other hand, the painting presented here, “The Defense”, communicates quite different feelings: in this composition the sense of tenacity, of strenuous resistance of the Italian soldiers in the trenches prevails who, in a post-apocalyptic scenario, make up a compact defensive line, dominated from above by an anthropomorphic cliff, probable allegory of turreted Italy.