The painting was the subject of an in-depth study conducted by Francesco Petrucci, conservator of Palazzo Chigi di Ariccia and author of the monograph dedicated to the painter published in 2009, which recognized without doubts the paternity of Gaulli

The Genoese painter Giovan Battista Gaulli called il Baciccio, as the biographer Leone Pascoli recalls, had in his portraits “singular mastery, being able to count himself among the most famous, and experts that have never been known”, for the vastness of his production and success obtained at the commission of the mature years of the seventeenth century. Compared to the conspicuous group of known male portraits, those with a female subject appear rare, showing themselves as episodes of mastery and pictorial virtuosity. Among these we note the magnificent Portrait of Giulia Massimo as Cleopatra (Genoa, Coll. Zerbone) and the Portrait of Lady as Cleopatra (Austin, The Bob Jones University, Blanton Museum of Art), with which the painting presented here shows elements of significant tangency that confirms the attribution. Apprear similar the edges of the embroidered and bejeweled garments, the porcelain complexion of the beautiful face, obtained with the use of the white lead, and the framing of the subject with the bust of three quarters. You can also notice the expedient of the impalpable veil that crosses the bust of the young woman already used by Gaulli in the Portrait of Eleonora Boncompagni Borghese (Florence, Uffizi). The face of the young woman with a winking and sensual look emerges from the brown background and is framed by a striped silk turban that acts as a hairstyle. The side light helps to reinforce her mysterious charm, also entrusted to oriental clothing, almost a theatrical dress. 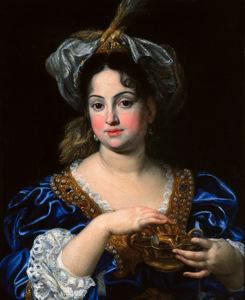 The portrait of lady in turquoise clothes found well would fit in the group of “Quindici quadri dj palmi tre per alto rappresentanti diversi ritrattj vestiti parte alla persiana, et altri all’Armena […] dj Baciccio”, registered in the inventory Colonna of 1714. The document testifies how the painter tried his hand in these effigies in oriental costumes, “head-on” portraits, which constituted among the sought-after collectors similar to those of the “Belle” held in the Palazzo Chigi in Ariccia.