Polymateric composition in methacrylate 90 x 50 cm signed (Gino Marotta) and dated (70) on the back. Title of the work indicated by the widow of the artist whom we thank for the information provided about the work.

Gino Marotta, like very few great 20th-century artists, has had the honor of exhibiting at the Louvre: in 1969, in fact, considered one of the most innovative Italian sculptors, he was invited to exhibit a representative cycle of his works, inside of the retrospective “4 artistes italiens plus que nature” with M. Ceroli, P. Pascali and J. Kounellis. Just for the artistic research of the latter Marotta looks with interest, after the informal season, in the period in which, with some young artists from different backgrounds (Pietro Cascella, Piero Dorazio, Fabio Mauri, Gastone Novelli, Achille Perilli, Mimmo Rotella, Giulio Turcato), founded the CRACK Group, with the intention of proposing a new version of neo-Dadaism and the rediscovery of the Futurist tradition. 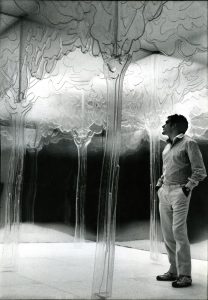 In the laboratories of the chemical and foundry industries, Marotta experiments with new materials such as polyurethanes and polyesters and realizes sculptures using industrial processes for mass production.

After the tapestries and the lead compositions he continues his poetry in search of increasingly unusual materials until, in the mid-Sixties, he created a first series of curious figures in perspex, a material at the time among the most innovative and resistant. Thus takes place that magical theater of the absurd, somewhat ironic and a bit melancholy; a transparent garden of plants, animals and artificial forms that play with myth and art, of which this “Rosa gelata” is one of the most successful examples, a prelude to the famous “Bandoni” and “Piombi”, paintings made in workshop with blowtorch.

The works of the early Sixties were exhibited in ’64 at the Thirteenth Triennale in Milan and in the solo exhibition at the Anthea Gallery in Rome, with the text by Emilio Villa “Anatomia Ginomarotta”. The following year they were present at the IX National Art Quadrennial at the Palazzo delle Esposizioni in Rome and in the personal “10 Sculptures” at the Galleria dell’Ariete in Milan, with a presentation by Giorgio Soavi. The artist from Molise has participated in major international exhibitions of historical interest, bringing his work, his name and that of Italy to the greatest museums in the world, from Copenhagen to Tokyo, Athens, Cairo, Dusseldorf, Berlin, Dortmund, Hamburg, Brussels, Antwerp, Madrid, Seville, London, Geneva, Zagreb, Belgrade, at the Museum of Modern Art in New York, at the 9th San Paolo International Biennial of Brazil, at the Universal Expositions of Montreal, Seville and Hanover.