In March 1929 Giacomo Balla with his family (his wife Elisa, his daughters Luce and Elica and mother Lucia Giannotti) went to live in the apartment in Via Oslavia in the Victories’ Quarter, on the slopes of Monte Mario. With the self-portrait of 1928 – Autocaffè – Balla signs his “conviction that pure art is in absolute realism, without which one falls into decorative, ornamental forms, so I took up my first art: interpretation of naked reality and healthy that through the spontaneous sensitivity of the artist is always infinitely new and convincing”. Now, during the hard years of World War II, he keeps alive his pictorial interests: he continues to paint the naked and healthy reality inside the house (his natures are rich in light in representing flowers and fruit on the tables in the living room of Via Oslavia ) and outside between the meadows and the narrow streets of Villa Borghese and the gardens of Viale Mazzini…

As Maurizio Fagio dell’Arco reminded me of, this type of painting belongs to a little-known period of the post-Futurist Balla: it is actually a moment of unprecedented research on nature and on the human face. The sense of ancient research always remains, both in the decomposition of color and in the vision of nature, not realistic but photographic cutting. This type of painting belongs to the forties when trying to recover the past going forward: the futurist motifs of speed and movement, of the decomposition of light have passed, but his research is still alive, his experimenter’s investigation as it had been in Twenties when defined in 500 I called myself Leonardo … 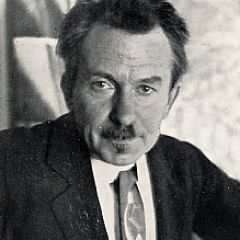 In this work realized on canvas (later – for conservative reasons – it is attached to the cardboard) Giacomo Balla, through a photographic cut from bottom to top, lets us enter with him in the sunny streets of Villa Borghese: on the way towards the bottom, between the fifth tree opens a blue sky while on the left the composition is illuminated by a rich yellow-green bush. In the foreground, the rich lawn with lush green is made even more vivid by small flowers as red is the BALLA signature on the right.

This bright oil comes from the collection of Lucia Marcucci (died in 2014): Marcucci lived on the top floor of the building of Casa Balla in Rome in Via Oslavia 39b and since the late sixties of the twentieth century attending Casa Balla is dedicated to the study and revaluation of the art of Giacomo Balla curating exhibitions dedicated to the painter.