Son and student of the homonymous German landscape painter who lived in Venice since 1837, Friedrich Paul Nerly studied at the Academy of Fine Arts in Venice under the guidance of artists such as Eugene de Blaas, Federico Moja and Pompeo Mariano Molmenti. From 1862 to 1865 and then in 1866 he performed military service at home, thus having the opportunity to visit Germany, especially Dusseldorf, Weimar, Munich and Dresden, and to draw the first notes and studies. He travels to Europe – France, Austria, Dalmatia – and to Italy where he visits Rome for the first time in 1868. Having refused academic training, he devoted himself to painting from life: in Sicily and above all in Naples he found the zenith of his artistic production. Dwelling on the light of the southern Italian landscape, he identifies marinas as the type of landscape painting that best suits his sensitivity for subdued chromatic choices and impalpable suspended atmospheres. 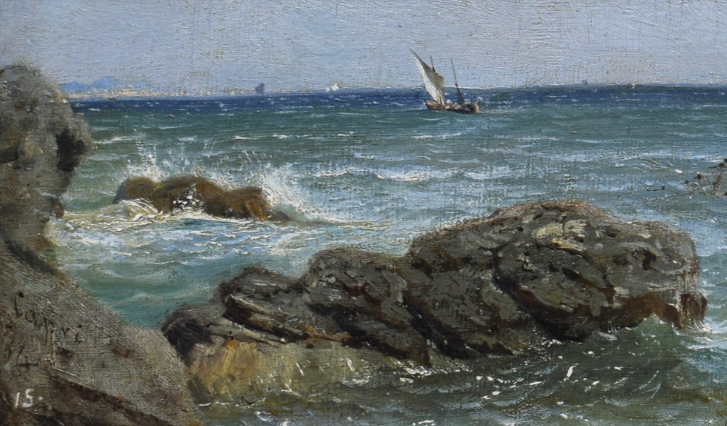 This is the case of this Caprese marina, in which the fishermen’s little ship, delineated with rapid touches of color, intent on casting nets into the sea, sails in waters slightly rippled by the current, whose waves break in the rocky spurs that emerge in the vicinity of the stacks. The horizontal cut of the composition, a type of support favored by the German painter, allows the artist to lay out a scene that cleverly combines the anecdote depicted in the foreground with the naturalistic context, dominated by the view of Naples and Vesuvius in the background.

The charm of the magical Neapolitan island suffered by Nerly – a subject that he will repeat several times during his artistic career: the sources speak of two views, one exhibited in Rome in 1883 and one sold to the Baroness of Friedlander in Berlin – is documented by numerous paintings which we find in his participations in numerous exhibitions and exhibitions in Italy and abroad: his presence at the exhibitions of the Roman Society of Amateurs and Cultors (from 1870 to the last years of the 19th century) is constant. If the works exhibited in 1870 are still linked to the Venetian setting, the themes dealt with later are almost all taken from the southern landscape. He took part in the National Exhibition of Parma in 1870, at the promoters of Turin (1879) and in Genoa (1879, 1880, 1893), at the international exhibitions in Vienna in 1873 and in Rome in 1883 (“The leap of Tiberius seen from the sea”).