Son of Joseph Charles Soulacroix, sculptor and painter from Montpellier, who trained at the Ecole des Beaux-Arts in Paris and moved to Italy in 1850, where he lived in Rome and Florence, before returning to France in Boulogne sur Mer, where he painted frescoes in the dome and in the chapels of the cathedral of the French city, Frédéric enrolled in 1873 in the Academy of Fine Arts and three years later in the school of painting, in Florence, where, a few years later, he will live with his wife Julie Fernande Frederic Blanc, in an elegant house with garden, in piazza Donatello.

In the Tuscan institute, during his formation, he stands out for his extraordinary ability to portray the texture and surfaces of the textiles, the silks, the satins and velvets. A marked predilection for genre scenes in historical costume that would bring him a considerable success, acclaimed both for his exquisite technique in building courtship gallant scenes and for the scrupulous way in transferring to the canvas the richness of the fabrics of the women’s clothes, of the tapestry and of the interior curtains. 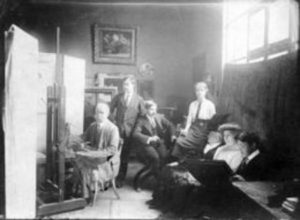 In the painting showed here, however, the gallant scene takes place in an open area near a lake, where on the background stands the profile of a building, exquisitely neoclassical, in Ionic style, which closely resembles the temple of Aesculapius, placed in the lake Garden in Villa Borghese in Rome: probably a sign of the painter’s passion, forged over the years, for the Eternal City, where he was much loved especially by high society, always in search of his delicate costumed scenes.

The man and the woman, dressed up fashion according to the Regency style, popular in Europe at the turn of the 18th and 19th centuries, are caught in a moment of correspondence of amorous senses: the young woman, lying in a hammock, got up the showy headgear, turns his gaze to the young gentleman seated next to her, in a stylish scene, imbued with grace and loveliness, in which the poetry of the landscape cloaked the game of seduction between the two young lovers.

Appointed Knight of the Legion of Honour in 1929, painter of portraits of outstanding real personalities of the early 20th century, as Queen Margherita, wife of the King of Italy Umberto I, the King of Siam and his brother, Prince Sanbasaska, Soulacroix is present today in collections of several major American and European museums, like the Museum of Fine Arts in Philadelphia and the Mansion House in London.