Francesco Gamba (Turin 1818 – 1887), The panorama of Turin taken from the Villa Barbaroux

In 1842 Francesco Gamba participated in the first exhibition of the Society promoting Turin’s fine arts, an exhibition which he often took part in later on, exhibiting some of his landscapes alongside other young landscape artists such as G. Camino, A. Beccaria, F. Cerruti Bauduc, E Perotti and C. Piacenza. Through a dozen paintings, he offered the Promotrice of 1846 an almost complete anthology of his study trips, made between 1842 and 1845 in the cities of Rome, Naples and Venice, meeting places for Italian and foreign artists. The purchases of works carried out by Gamba made in this period by the Nigra bankers family (The Grand Canal in Venice and Lake Maggiore between Baveno and Stresa) and by Giovanni Mestrallet (Marshland in the Canavese) appear significant, which testify to an early interest from part of the emerging bourgeoisie of Turin towards the artist’s landscape painting. Between 1845 and 1855 the Turin painter made numerous stays abroad, coming into contact with the artists of the Fontainebleau school and with the painters of the Düsseldorf school, in particular the seapainters A. Achenbach and H. Mevius.

In 1853, P. Jury, art critic and landscape painter, inserted ours alongside the artists of his generation, within that new “Piedmontese school” of the landscape, far from the conventions of academic art, directly inspired by “open air, to the aspect of living nature” (p. 211) and, at the same time, distant from an exclusively mimetic approach of the natural datum. Within this interpretative framework at Gamba the merit of having renewed “the genre of the seapainting […] meditated on the truth” was recognized. However, the jury did not forget to mention Panorama di Torino (1852) and Panorama of Moncalieri towards the west (1853: Agliè, castle), works purchased by Queen Mother Maria Theresa of Habsburg Lorraine as representative of Gamba’s painting. 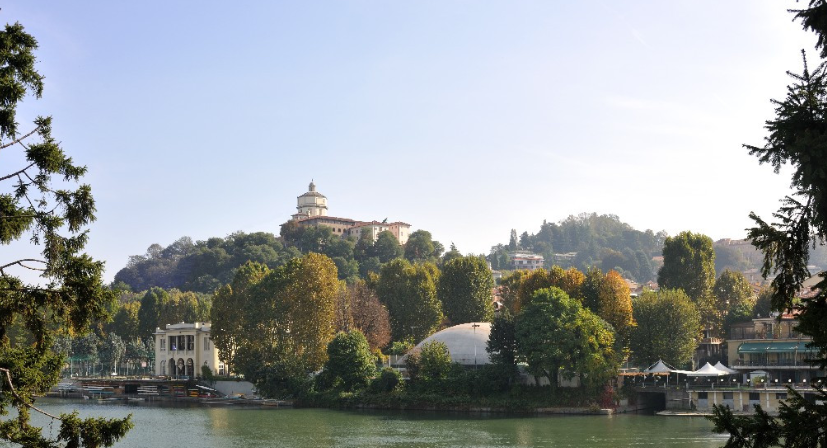 Just the Panorama of Turin mentioned by the Jury can be identified in the painting presented here, in which a meticulous topographic view of the Savoy city taken from the eighteenth-century Villa Barbaroux, is dominated by the profile of the church of Santa Maria al Monte dei Cappuccini. The church, built on the foundations of an ancient fortress designed by Giacomo Soldati modified by Ascanio Vitozzi, marks the symbolic value of the policy of alliances made by the Savoy with religious orders between the sixteenth and seventeenth centuries.