“The sculpture is the most fundamental among the arts. I consider the act of creating an artwork a real state of grace far from the will, but closer to the faith.” Words that sum the Ferruccio Vecchi ( 1894 – 1959 ) ’s  artistic research, futurist and inseparable mate of Marinetti, and also charismatic leader of “arditismo” and connection official between Mussolini and D’Annunzio during the “Fiume Exploit”. At the age of 27 years, ostracized by Italian politics during the process of normalization of “arditismo”, Vecchi decides to take his revenge in the artistic field. In a first time, as novelist and playwright, then, as the regime’s sculptor, after several travels around the Europe and the Usa. Through the use of rhetorical and bombastic proclamations, at the beginning of the Forties, he shows himself  as  the re-founder of a Fascist art, devoted to its warlord, the dux Benito Mussolini: The Empire leaps in the mind of the Duce embodies the most shining example of a production which, albeit aimed to please the regime, presents avant – guard and originality characteristics. 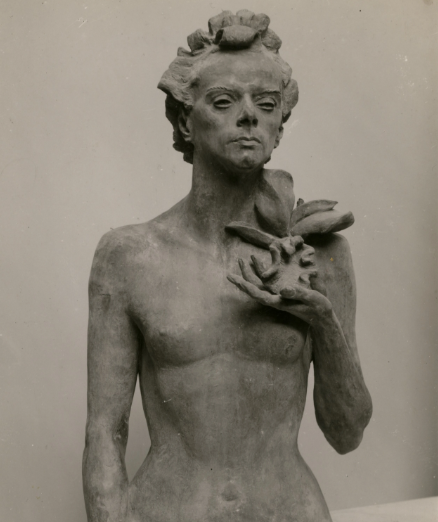 Within his sculptural production, of which a summa was presented at the XXII Venice Biennale in 1940, the nudes stand out, often the object of disturbing and disturbing symbolic surgeries, created in order to sanction the primacy of fertility: as in “Spring – first motherhood”, in which a flower emerges from the belly of an androgynous being, and in the work presented here, made in bronze and dated 1942, “The orchid”, where the sacred flower sprouts from the body of the young woman, whose properties are believed by popular belief, since ancient times, a remedy against male and female infertility. The sculpture is the result of a spiritual syncretism that will lead Vecchi to convert to Catholicism after a life of anticlerical writings animated by a fascist neo-paganism, the last transformist pirouette of a biography full of contradictions and cultural adaptations to the radical transformations of post-war Italy.