Mixed media on paper 28 x 22 cm mounted on raw canvas signed (Pirandello) on the lower left. On the back, authentic released by Pierluigi Pirandello on 12/20/1979.

“These tortured characters carry their inhuman form around. They are not men or women despite the most cruel accentuations, but figures of other planets on a rough and arid clay under gray skies, without clouds; where even the thunderstorms do not resemble those of this earth”: with these words Renato Guttuso reviewed, in the early 1940s, on the pages of the magazine” Primato”, the first works, made by Fausto Pirandello, dedicated to the theme of Bathers, subject that will mark his entire artistic career, starting in 1925, when he debuted with a work dedicated to a similar theme at the III Roman Biennale.

An obsession from which the painter, son of the famous writer from Agrigento, never succeeded in detaching himself, as Fabio Benzi explains in the 2010 catalog dedicated to Pirandello’s artistic production having as subject this typology of figures: “The theme of” bathers ” it was certainly among the most interesting frequented by Fausto Pirandello, to the point of making it one of the most identifying features of his painting: these are groups of naked men and women, arranged in serial compositions on the shoreline, initially exposed in a gray and ashen light , but then starting from the fifties lit by more pure and brilliant colors […] The pastel allowed the artist a freshness and a disenchanted variety of forms and effects that he found in the Bathers almost the only and exclusive existential form that satisfied him , metaphor of the contrast of life and death (…) in which the man-wetting is like a leaf carried by the wind and dried by in the sun ». 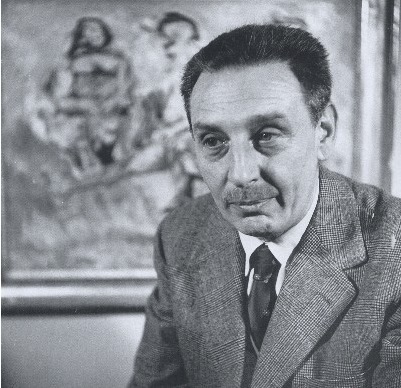 An analogous precariousness envelops the work presented here, in which Pirandello chooses to represent the everyday life of the poor, using an essential and unadorned realism that distorts the traditional “beauty of forms” to replace “the disharmony of bodies”. Here, the veterans of the war take the place of the more classic Pirandellian bathing theme, characterized as they are portrayed in this work by the marked expressive pathos, by convulsive nudity: the figures seem to contract desperately, as if they could – getting rid of their wounds – also to be aware of the weight of remorse and of the life that is destined for them: the nudes swell and twist in an aphonic and tumultuous space, under a very clear light, a horizon of hope filtered by a leaden sky.